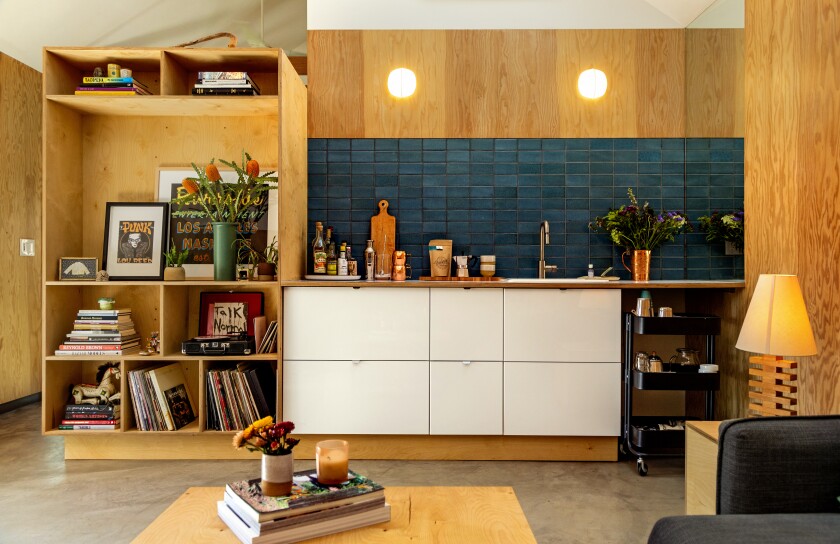 Four years ago, when they were running out of room in their two-bedroom bungalow, Pastor Alvarado and Gennifer Leong-Alvarado went to architects Rebecca Rudolph and Catherine Johnson of Design, Bitches with a proposition. Could they design a multipurpose room that served not just them, but their extended family? As much as they needed space for themselves and their two children — Pastor Lee, 9, and Kika Mei, 4 — they also wanted to accommodate more of the people they love. They had a big extended family that visited regularly from out of state. Pastor wanted “something minimal, with essentials, that we could use as an evolving space.”

Gennifer was hoping to “create a space we love and not just an extra bedroom.”

Like so many young families in Los Angeles, the Alvarados realized their small bungalow was overflowing with kids stuff: toys, art supplies, schoolwork, soccer gear. But scaling up wasn’t an option; California’s lack of affordable housing, paired with skyrocketing real estate prices, made moving into a new spot unfeasible. Even so, the couple didn’t want to leave their Atwater Village neighborhood, a diverse community filled with humble homes and bungalows built in a variety of charming architectural styles.

“We wanted to be close to our Hispanic and Asian cultures,” says Pastor, who was born in Panama and grew up in South Texas. “We love that we have easy access to pork buns in Chinatown and pupusas at El Amoroso [in Atwater Village].”

“We love this house,” Gennifer continues. “We love the location and the convenience. The house size is manageable for everyday living, but we did feel that we needed some more room for guests — especially with our young children. Seeing that both of us are not from the California area, it became a priority to have somewhere for our family to come and stay with us for comfortable amounts of time without being in a hotel. The ADU seemed like the perfect solution.”

The couple wanted to keep things simple and originally considered adding on to the one-car garage built close to the house — a layout typical of properties in Atwater Village.

But after consulting with Rudolph and Johnson, they decided to remove the garage and build something new at the back of the 6,750-square-foot property so they could use the yard as living space.

“We talked about designing something that felt comfortable and a little more like an upgrade on what they have but still spoke the language of the existing house,” says Rudolph.

Working with a budget of $175,000 for the building, the architects designed a simple pitched structure with a flat-roofed, modern attached carport that can be used as a covered patio.

The general footprint of the house quickly followed, thanks to the couple’s detailed PDFs and mood boards: a simple box with plywood walls, smooth concrete slab floors, a minimalist kitchenette and an open-plan living room.

On the outside, dark navy blue cement-board siding was installed to allow the house to disappear and blend into the sky at night while allowing the plywood interior to “glow like a lantern,” Rudolph says.

With grandparents in mind — the architects say they have been getting many inquiries about adding ADUs, or accessory dwelling units, specifically for aging parents — the floor plan of the ADU was laid out to mirror the living spaces of the main house. To address concerns about aging in place, the ADU is built with one small step to the deck, which can be easily ramped in the future. The bathroom is large and open, with no level changes, allowing for easy access for older guests.

“We wanted to give them a sense of privacy while being connected to their family,” Johnson says. “The families can peek across the yard and see if they are eating outside, but it also allows them some visual privacy. There is clear space for mobility. We wanted to make it flexible for them, easy for them to get around, but still feel like a beautiful, wonderful, independent-feeling space. It’s nice to connect generations rather than isolate families.”

Everything in the 465-square-foot space has been designed to maximize the small floor plan: There is storage on both sides of the house, including a tool shed. There is room for a refrigerator under the kitchen counter and a small electric cooktop. Two skylights flood the interiors with natural light. Three doors lead to the outdoor dining area and saltwater pool, all with views of the drought-tolerant garden. When Gennifer’s father comes to visit, he can watch television on a bookcase designed to accommodate the TV monitor. When he is not in town, it is stored underneath the bed.

When it came to furnishing the rooms, the couple chose simple materials and furnishings that could withstand young children. Marine-grade plywood walls and a double-sided wardrobe and shelving unit by Waka Waka separate the sleeping and living areas and provide storage. Simple plywood shelves in the living area are lined with plants, books and personal mementos — all reminders of the family’s life together. An Ikea modular sofa in the living room folds out to accommodate overnight guests, while a simple Case Study desk from Modernica serves as Pastor’s corner office.

The outdoor area is essentially another series of rooms, with a lounge area with a fire pit; a covered patio with a ceiling fan for hot Los Angeles summers; and a slightly raised boardwalk inspired by the Japanese engawa, a type of veranda that serves as a passageway. While the boardwalk calls to mind the L.A. River landscape nearby, a small patch of low-water lawn provides a functional place for the family to play soccer.

Now when Pastor walks to work in the morning, the producer, who has always worked remotely, doesn’t have to walk far.

“It is separate but connected,” he says of his 35-foot commute. “I can leave the house, and it feels like I’m going to an office. I love the separation.”

Though the custom project may seem exclusive to the Alvarados, it is actually one of more than a dozen designs offered through the Los Angeles Department of Building and Safety’s preapproved ADU Standard Plan Program, a system designed to simplify the plan check process for ADUs. The new initiative, organized by Mayor Eric Garcetti’s office in collaboration with LADBS, launched in March as a way to expedite the construction of ADUs by offering preapproved designs that have already gone through the plan check process, including designs by Escher GuneWardena Architecture, Fung + Blatt Architects, Taalman Architecture and WHY Architects, among others.

The Alvarados’ ADU was built prior to the Standard Plan and was permitted as a recreation room because it does not have a full kitchen. But the preapproved version is an ADU, meaning anyone can hire the architects and the structural engineers under separate contracts, just like they would for any custom architectural project. Because the design of the structure is preapproved, however, it cannot be modified. “You cannot just buy the plans,” Rudolph says. People can customize certain aspects of the design, however, including the covered patio, which is optional, as well as the bathroom window, tile color, finish cabinetry and plumbing fixtures.

When they started the project in 2017, the couple budgeted roughly $175,000 for the ADU. By the time the house was finished in 2019, the entire project — ADU, carport, pool, hardscape and landscaping (front and back) — came in at just under $300,000 with “careful planning and strategies on when to cut corners and when to really invest in the project,” according to Gennifer. The ADU itself cost just under $200,000, with the addition of the carport, landscape and deck bringing it close to the $250,000 range. With the current cost of construction skyrocketing and a shortage of laborers and materials, Rudolph estimates that a similar ADU would cost, at a minimum, $550-$750 per square foot for the structure, not including site work, carport and patio awning.

While not technically a garage conversion — the single-car garage is now the attached carport — the design is an answer to one of the most common arguments lobbed against ADUs: If you remove the garage, it puts more resident cars on the streets and reduces the free parking available to residents.

“Our neighborhood is pretty down to earth,” says Rudolph, who lives nearby. “There are a lot of multifamily households, and I’m happy to see anything that is nicely built and up to code. They are safer than the illegal dwellings that people are living in. It gives people more freedom in the different ways that they can stay in their house and not have to give it up. I don’t think it’s a negative in terms of property value. It’s a positive thing.”

Midway through the process, the couple decided to add a saltwater pool, which prolonged the project due to the fact that the pool had to be completed before the final inspection of the ADU was approved. Now that the house is finished and the landscaping is complete, the couple say they feel lucky. They have a comfortable, quiet and private compound with plenty of space for visiting relatives, a backyard for their children, a pool house and occasional classroom, and an office for Pastor.

“The ADU was our haven during the pandemic,” says Gennifer, who works in marketing at Disney. “We love that it flows and it’s well-thought-out. We were so fortunate to have this space. We were in lockdown, and yet we got to see our parents.”

David Spade buys a modern mansion near the Comedy Store for $13.85 million