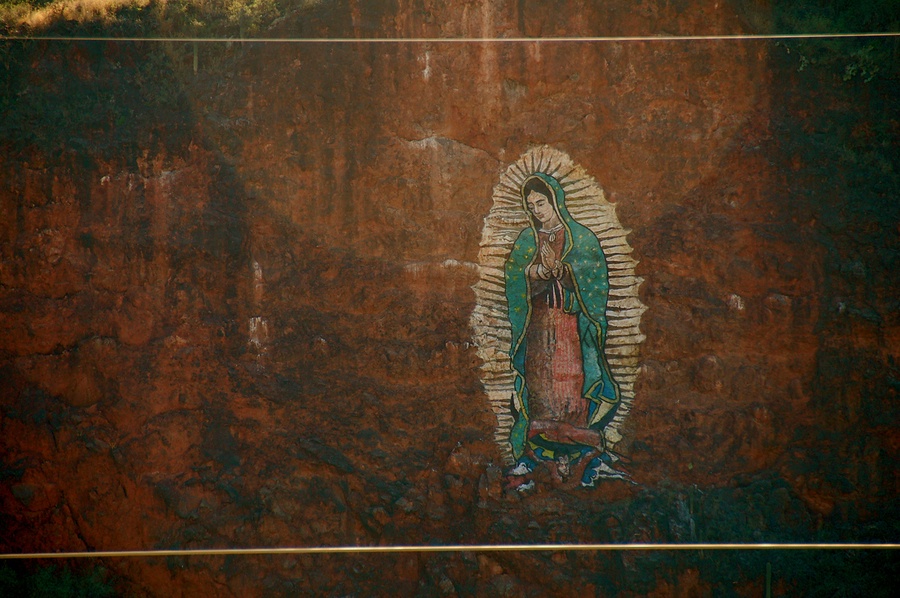 It’s estimated that a million or more Catholic Mexicans visit the Basilica de Guadalupe in northeastern Mexico City on December 12 to pay homage to the country’s most revered religious icon: La Virgen Guadalupe, Our Lady of Guadalupe.

The pilgrimages to the Basilica de Guadalupe

Some people begin walking to the basilica —in some cases from towns and villages many miles away— hours or days before December the 12th.  Many of the pilgrims crawl the last few hundred yards of the journey, from the gates of the basilica to the church itself on their knees: a symbolic, painful experience.  The pilgrims will arrive late on the eve of the day or in the early hours of the morning to ensure that they are at or near the shrine at sunrise.

A history that dates back to the colonial era

The history which led up to this occasion goes back to the time of the Spanish conquest.  When the Spaniards arrived, they found indigenous peoples with strong, deeply-rooted belief systems of their own.

The story of Juan Diego takes place on December 12th, 1531.  According to narratives, the Virgin of Guadalupe appeared to him when he was walking on a hill named Tepeyac. The apparition is described as a young woman with black hair and darkened skin, which is why the Virgin Guadalupe is sometimes referred to as “la virgen morena” (the brown-skinned virgin).

The virgin told Juan Diego to go and tell the local Bishop to build a church on this hill, and Juan Diego did as he was told.  However, the Bishop was left unconvinced by the story and gave the boy short shrift.

So the virgin appeared once more, and on the second occasion told Juan Diego to collect flowers from the top of the hill.  Being December, Juan did not expect to find any but upon his arrival there, he found the hill covered with beautiful flowers.  As instructed, he collected some and, using his overcoat to carry them, returned to see the Bishop.

The Bishop, seeing the unseasonable flowers, also saw an image of the Virgin Guadalupe imprinted onto to the coat.  Convinced it was a miracle, he ordered the building of the church on the hill of Tepeyac—at the precise location where the current-day basilica is situated in Mexico City.

Today, Catholic Mexicans bring gifts and offerings to the virgin, petitioning her for help and good providence; for example, when a family member is ill, when there is conflict in their life, or when they are to embark upon some personal or business endeavor.

For those who cannot make it to the basilica in the country’s capital, private vigils are held at homes and churches across the nation.  Fire crackers are often let-off, filling the night sky with lights and resonating sounds; celebrations also include fiestas with processions in the virgin’s honor.

The Virgin Guadalupe is omnipresent in modern-day Mexican culture.  Images of the virgin may be seen everywhere: at churches, at street shrines, in taxis and buses, in homes, stores, bus stations and airports; in people’s cars, in offices, and even as tattoos. Nearly five hundred years later, the Virgin Guadalupe continues to be adored and revered as a guardian, minder, and savior by millions of Catholic Mexicans.

Juan Diego was canonized by Pope John Paul II in 2002, at which time the Pope said, “Christ’s message, through his mother, took up the central elements of indigenous culture, purified them, and gave them a definitive sense of salvation … facilitating the fruitful meeting of two worlds and becoming the catalyst for a new Mexican identity.”

The start of the Guadalupe-Reyes holiday season

December 12 also marks the beginning of the Christmas Holiday season in Mexico, colloquially known as Guadalupe-Reyes, referring to the period between December 12th, and January 6th—Kings’ Day.

Mexperience helps you to discover Christmas traditions in Mexico and enjoy all the country offers during this important festive period.

Mexico Home Finders: Helping You Buy Your Home in Mexico