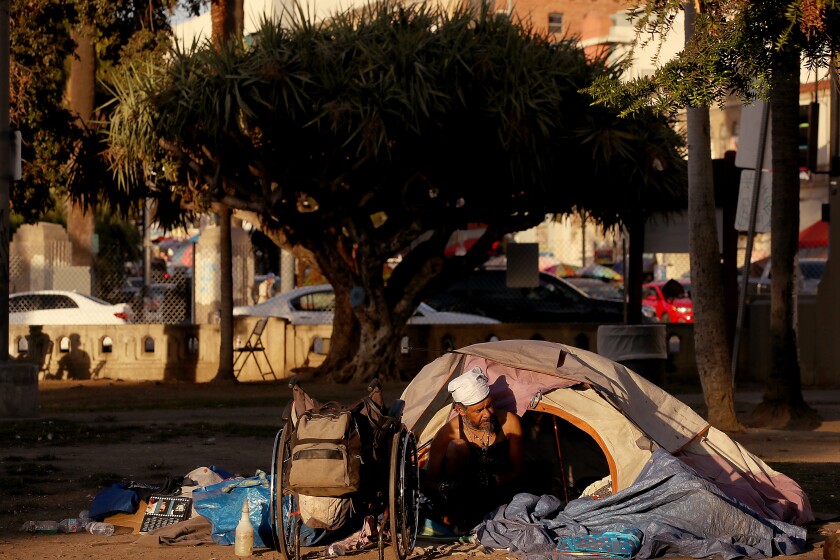 In an ambitious effort to address the homelessness crisis in Los Angeles, a coalition of housing advocates, labor unions and progressive activist groups plans to file paperwork on Thursday for a ballot measure that would increase taxes on real estate transactions in the city to fund permanent housing for homeless people.

The organizers hope to collect nearly 65,000 signatures by spring to place the tax proposal on the November 2022 ballot.

“This is really about millionaires and billionaires paying their fair share to have a transformative approach to solving our housing crisis,” said Laura Raymond, director of the Alliance for Community Transit-Los Angeles, or ACT-LA, and a leader of the ballot measure coalition.

“This affects folks who are very privileged who have made money off increases in property values, and inequity is one of the reasons why we’re in the situation we are in. So, it’s making sure that we’re sort of looking out for each other in protecting our neighbors,” Raymond said.

L.A. voters want the government to focus on shelter for homeless people living in the streets, even if those efforts are short term, a poll has found.

The coalition said the tax would have applied to about 3% of all property sales in the city from March 2019 to March 2020, generating about $800 million.

The proposed ballot initiative,titled United to House L.A. Citizens, could benefit from a recent California Supreme Court ruling affirming that tax increases proposed by citizen initiatives need only a simple majority vote to pass, rather than two-thirds. This ruling was reaffirmed last year and allowed San Francisco to begin spending nearly $300 million a year in taxes on businesses to fight homelessness.

What’s being proposed is known as a documentary transfer tax. The city of Los Angeles already has a similar tax that sends revenue into the general fund. The rate is lower than what is proposed for the ballot measure. Berkeley, Oakland and Culver City also impose a documentary transfer tax to fund services. In Culver City the law doesn’t specify whether the seller or buyer pays the tax.

Homelessness will be the dominant issue in Los Angeles elections next year as many candidates vie to replace Mayor Eric Garcetti and compete for number of City Council seats.

A recent Los Angeles Times poll, conducted in cooperation with the Los Angeles Business Council Institute, found deep frustration over widespread, visible homelessness in Los Angeles. Those voters surveyed in the countywide poll showed some willingness to be taxed again to help address the crisis.

By 51% to 41%, voters said they would support a tax increase to “create permanent initiatives to help homeless individuals and reduce the homeless population.” Support increased to 63% if a tax increase included a clear plan to ensure accountability and transparency.

The group observed that most of the housing experiments meant to help poor people in Los Angeles had been done at relatively small scale, and agreed that it was time to vastly expand funding for housing.

A recent report from the California Housing Partnership found that about 500,000 low-income renters don’t have access to affordable housing in Los Angeles County.

“We’ve got a lot of folks on the ground, working directly with tenants really assessing the type of housing solutions that we need and at what scale and with this measure, that’s what we’re trying to do with it,” Raymond said.

Los Angeles city voters in 2016 approved Proposition HHH, a $1.2-billion bond measure to fund homeless housing. In 2017, county voters passed a 10-year, quarter-cent sales tax increase to fund homeless services. Politicians and voters have been frustrated by the slow opening of housing projects funded by Proposition HHH. More than 7,000 units have been funded but fewer have opened or broken ground.

Some of the groups backing the new ballot initiative were key supporters of both earlier measures, and one of the major supporters of the earlier efforts, the United Way of Greater Los Angeles, is helping craft this measure.

The revenue from the proposed measure would create more than 26,000 homes for homeless people over the next decade and help about 475,000 renters stay in their homes each year, according to coalition estimates. 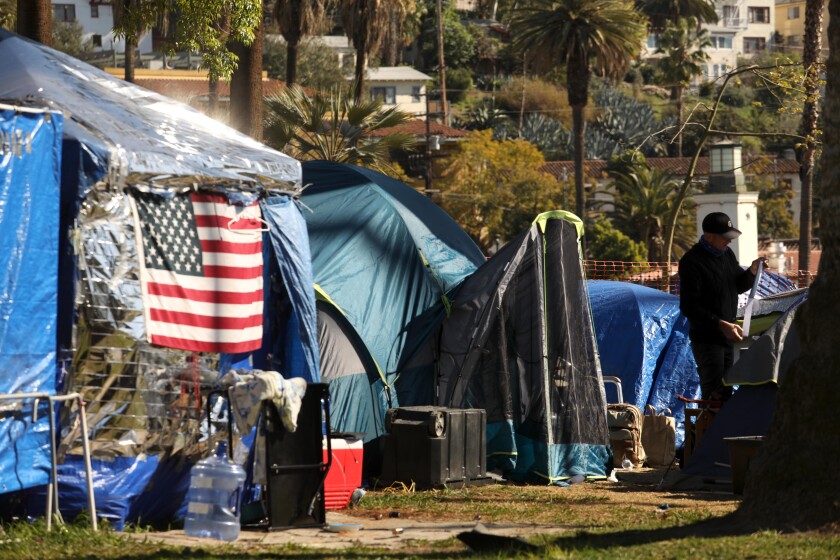 L.A.’s mayoral candidates agree homeless encampments need to go. The question is how

For some candidates, thousands of new tiny homes, rented hotel rooms and other forms of short-term shelter are the place to start solving homelessness.

About 70% of the proceeds would be spent on various forms of affordable housing. Most of the rest would fund an inspector general and citizens oversight committee, along with homelessness prevention programs such as right-to-counsel and rental assistance.

About a quarter of the total revenue would seek to fund projects through the sale of state and federal low-income housing tax credits, similar to how Proposition HHH works.

About one-third could be spent on turning existing buildings into homeless housing, through purchases, master leases and renovations. This portion of money could also be devoted to alternative models for financing of “permanent supportive and affordable housing including construction, acquisition, rehabilitation, lease, preservation and operation of rental or mixed rental/homeowner projects.”

The year of the party tent: What the age of COVID taught us about architecture in 2021

Two New York Newbies Dive Into Midtown Manhattan. Which Apartment Would You Choose?