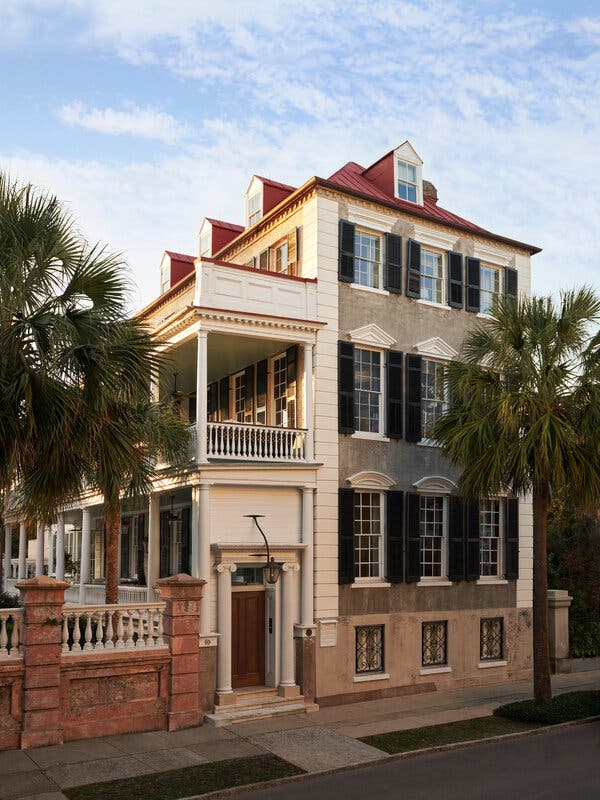 The stately 1788 home in South Carolina had expansive rooms and a walled garden. But it needed a lot of work — and that would take time and money.

For years, Julie and Rowan Taylor dreamed of what it would be like to live in Charleston, S.C.

After that, they often visited the city from their home in New Canaan, Conn., and their admiration for its handsomely weathered buildings, towering palms and expansive oaks — as well as its thumping urban heart — only grew.

But Mr. Taylor worked for a company based in New York City, and the couple had three daughters who had their own friends and routines, so a move didn’t seem realistic.

As the years passed, their daughters moved out and Mr. Taylor founded his own firm, so the idea began to feel less far-fetched. They had welcomed a fourth daughter to their family in the interim — Pippa, now 10 — but a relocation still seemed manageable. So in 2016, on a flight down to Charleston, Mr. Taylor decided to run a real estate search on his iPad.

He did. And after touring a few houses, Mr. Taylor upped the ante. “He said, ‘Which one do you like best?’” Ms. Taylor said. “He called my bluff.”

They picked a house, made an offer and began envisioning life in their new home — until the deal fell apart. But by then, it was too late to turn back.

“Over the course of the next few months, we just made this decision that, you know what, we’re going to do this,” Ms. Taylor said.

They looked at more houses while consulting with Eddie Fava, of the Charleston firm E E Fava Architects. Ms. Taylor was game for buying a house that needed some cosmetic updates, although after living through a full-blown renovation in Connecticut, she set a guiding principle for their search: “I didn’t want a project,” she said.

But that was before Mr. Taylor fell for a stately Federal house from 1788 in the South of Broad neighborhood. The house was 8,130 square feet, with expansive rooms and its own walled garden. But it needed a thorough restoration and updating, which they wanted to avoid. Still, Mr. Taylor couldn’t get the house out of his head, so he asked Mr. Fava to take a look.

The Taylors swallowed hard and bought the house for $5.35 million in January 2017. Then they moved into a rental down the street and began the long process of reviving the house with Mr. Fava, Betsy Berry, an interior designer, and Sheila Wertimer, a landscape architect and a partner of Wertimer & Cline.

Although the project involved a gut renovation, the design team was intent on retaining the house’s character while dragging it into the 21st century with contemporary systems and spaces, including rooms for watching TV and working from home.

“I believe you can have the best of both worlds in these types of homes, if they’re thoughtfully put together,” Mr. Fava said. “It doesn’t have to be a museum house.”

They removed and retained the original doors, molding and paneling, so they could be copied as needed and put back. They patched the existing floors with matching pieces of antique heart pine and restored the staircases.

Mr. Fava also made significant architectural changes, including removing the floors from a connected former carriage house to create a new double-height family room on the ground level, with a large dressing room connected to the primary suite above it.

Ms. Berry was just as intent on mixing new with old. “This was my dream project, because the history of the house is just so amazing,” she said. “What I love to do is respect and honor that age, but also bring in a new feeling of youth, and modern touches, to give it more life and spirit.”

In the entrance hall and in a sun porch, she had the pine floors painted with a decorative pattern and then sanded and scuffed to evoke a sense of age. In the dining room, which is furnished with a mix of antiques and custom contemporary pieces, she covered the walls with a custom hand-painted scenic wallpaper from Gracie and hung a Branching Bubble chandelier by Lindsey Adelman from the ceiling.

In the living room, where she suspended a 1950s Fontana Arte chandelier from the center of an ornate ceiling medallion, she proposed lacquering the walls and was surprised when Ms. Taylor urged her to use a daring raspberry hue.

“I had originally showed her a safer color, but she was like, ‘No, I want color. I want it to be bold,’” Ms. Berry said. “It was scary for me, but that room turned out beautifully.”

After two years of design and construction, and more than $4 million, the project the Taylors hadn’t wanted to take on was finally complete. Just before the family moved in, near the end of December 2019, “We moved everything into their closets, made the beds and decorated for Christmas,” Ms. Berry said. “We had all the fires going and Christmas music playing.”

She added: “We walked them through the house with all their daughters, and then we went up to the salon. And Julie and I just cried and hugged.”

From London To Dubai: Private Residences And Deluxe Penthouses For UHNW Buyers