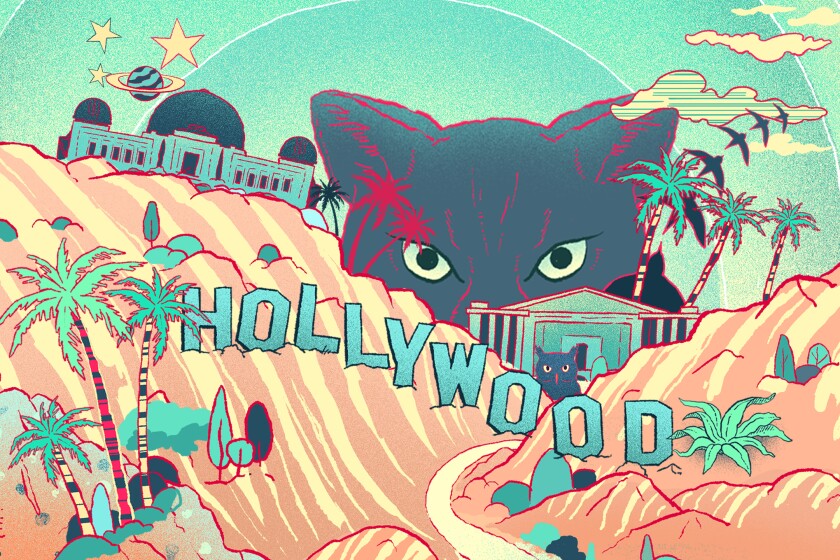 This summer, we began asking readers to submit their most pressing business-related questions about Los Angeles and California.

Then we put the questions to a vote, allowing readers to decide which question we would answer in story form.

Our latest winner was submitted by Brice Arnold, a resident of Woodland Hills: “Why aren’t empty parking lots and office buildings in L.A. converted into parks?”

Let me start with a pretty uncontroversial statement: Parks are awesome.

On a macroscopic level, they can help purify air, cool down neighborhoods and capture much-needed stormwater — all necessary to address the environmental havoc we’ve wreaked on our landscape.

On a personal level, they’re where we teach our kids to ride bikes and play basketball with friends. They’re inexpensive — and beautiful — places to go on dates and celebrate birthdays, loved ones gathered around wooden picnic tables.

“The pandemic really illustrated how crucial parks are for our communities,” said Jon Christensen, an adjunct assistant professor at the UCLA Institute of the Environment and Sustainability. “People are using them more than ever — and they are also providing places for COVID tests, places for food distribution, places for kids to play when they didn’t have school.”

Our guide to Griffith Park. How to safely explore its wild, classic and hidden gems

Pandemic or not, Griffith Park takes you to L.A.’s urban edge and plunges you into what remains of our wilder side. Let this mini-guide send you on your way.

But here’s the thing: Not every Angeleno has access to nearby park space.

“Communities of color have significantly less access to parks,” said Tori Kjer, executive director of the L.A. Neighborhood Land Trust. “Park space is not equally distributed across the city,”

Brice Arnold noticed a disparity in park access when he moved from Santa Monica to Woodland Hills, explaining that he now has to drive to take his dog for a walk in a park.

Arnold isn’t alone. “51% of the residents of Los Angeles County do not have a park within walking distance of their home,” Christensen said.

Parks are nice to have near your home — but why are they so important?

“There’s a very substantial relationship between having a park within walking distance of your home and good health outcomes,” Christensen said. “This is clearly a public health benefit issue and an issue of environmental justice.”

Before we get into the challenges of developing parks, it’s important to understand how parks are created.

Generally speaking, there are three ways parks are developed in cities, said Guillermo Rodriguez, California state director for the Trust for Public Land.

Park development can happen through city and regional planning, especially during periods of urban expansion — such as when L.A.’s agricultural areas were initially rezoned for commercial and residential development.

Parks are also created during infill development and revitalization efforts, when large hotels, apartment buildings and other structures are constructed in place of older structures.

In these instances, it’s often the developer that suggests building a public park. “One of the mitigations for getting their projects approved by city councils or board of supervisors was to offer community benefits — and many times these developments offered parks,” Rodriguez said. 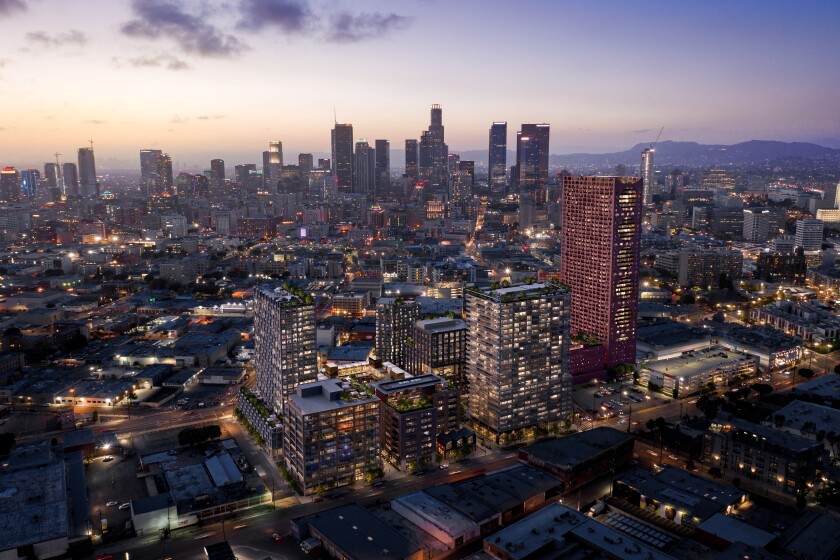 A $2-billion mega-project could reshape the Arts District

A cold storage plant in Los Angeles’ Arts District would be replaced with housing, offices, a hotel and shops in a proposed mega-development called Fourth & Central.

Third — and most relevant to this story — there has been a growing effort to increase park access within historically redlined, under-resourced neighborhoods.

We know parks are needed — so what’s the hold-up?

In some cases, it comes down to a lack of funds. “Low income, minority-majority cities rarely have the money to build new parks,” said Alessandro Rigolon, an assistant professor in the department of city and metropolitan planning at the University of Utah.

Some good news: Both California and Los Angeles seem to be moving toward freeing up more money for parks.

“We have strong support for parks among voters. Measure A is providing $100 million a year to build and improve parks and has a really strong equity focus,” Christensen said. “We have similar funding at the state level… and there’s increased support at the federal level.”

However, L.A.’s red-hot real estate market still poses a challenge. If you’re hoping to turn a vacant building or empty parking lot into a park, first you need a willing seller.

“Many times, the owners want to hold on to the property, thinking that the whole neighborhood is going to change,” Rodriguez said. “For example, they’d rather sell to a large big box development,” which would likely be more lucrative.

In addition, “it takes government a really long time to go through a process to acquire a piece of property,” Rodriguez said. “If you own a home or [building] and you want to sell it, you’re not going to want to go through a sale that’s going to take years.”

That’s where nonprofits can be a major help, Rodriguez said. Organizations “can go out and do this kind of acquisition work a lot quicker… and then, in turn, gift the park back to the city.”

Another challenge? Making sure the area meets environmental standards, especially if the land was previously used for industrial purposes. “[Environmental remediation] in itself can be as expensive as the cost,” Rigolon said.

Sometimes, it’s difficult to find any vacant land at all.

“Looking specifically at low income communities of color… there aren’t a lot of extra vacant lots sitting around,” Kjer said. “And if there are, and they’re big, they will probably have housing built on them, which is very important right now.”

There are plenty of other obstacles to park development, including liability concerns, the micropolitics of city councils and the challenge of keeping the park maintained once it is constructed.

“It’s really complicated now to fix the issues of systemic racism around inequity in access to parks,” Rigolon said. 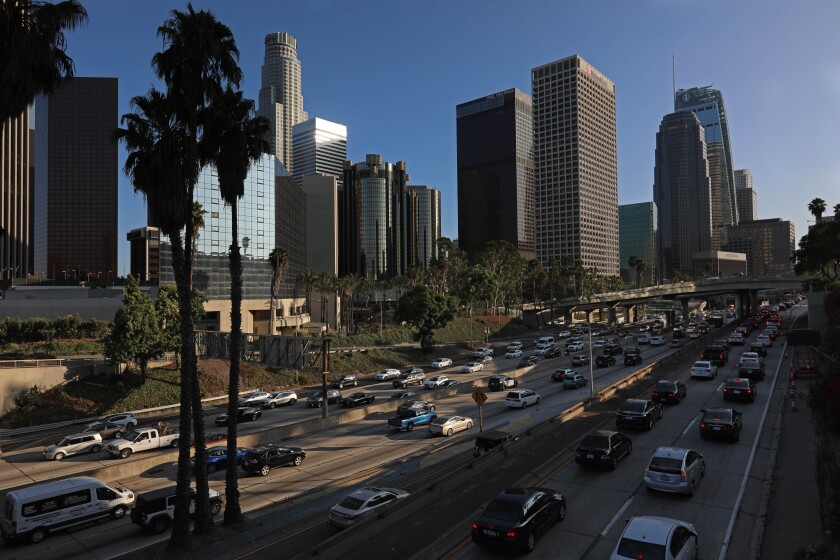 Readers sent in their most pressing questions about L.A. Which should we answer first?

We picked our favorite reader questions — and now you get to choose which question we answer first.

But despite these challenges, park advocates have gotten creative in a number of ways .

People have been very imaginative in proposing ideas for park development, said Tara Roth, the president of the Goldhirsh Foundation, which runs the LA2050 initiative. “In 2050, we want 95% of L.A. residents to live within a half a mile of a park,” Roth said.

A few examples of park innovation?

Pocket parks are one way around the real estate challenge. “There are many properties in Southern California that are just really small that you really can’t develop anything major,” Rodriguez said. “They can be quickly acquired [and] quickly developed.”

The Trust for Public Land also has started transforming alleyways into safe multi-use space for the public. “There are 900 linear miles of alleys in the city of L.A., and a disproportionate amount of those alleys, 30%, are in South L.A. alone,” said Robin Mark, Los Angeles program director at the Trust for Public Land.

In addition to serving as community green space, the redeveloped alleyways also help capture stormwater and provide students with safe routes to school.

A colleague of mine was recently considering buying a home in Long Beach located across from a public school, partially because he thought it would be nice to take his kids to the schoolyard to play on weekends and during summer break.

He ended up choosing a different home — one near a regular park — when he learned the schoolyard was never opened to the public.

This could change in the future. The Trust for Public Land is working on a “green schoolyards” initiative, where the public is welcomed after school hours and asphalt is replaced with vegetation and other “nature-based” materials.

This program could be key to closing the park access gap, Rodriguez said.

“Los Angeles Unified is one of the largest landowners in the county,” he said. By working with the district, “I think we can really move the needle. Will it replace a traditional park? No, but it provides access now to nature where we don’t have it.”

Christensen agrees, adding that joint-use agreements with schools are “one of the things that we could do most quickly to address the [park access] inequity.”

Among park development advocates, community buy-in and engagement are of crucial importance.

The Adopt-A-Lot pilot program involves community members throughout the park planning process, with local residents choosing the amenities they’d like to see on the lot and creating a site plan for the space.

“Our whole goal was ‘How do we make a more democratic and inclusive urban planning and design process?’” said Eric Riley, the project manager for Adopt-A-Lot.

So far, the pilot program has debuted two parks — one in North Hills and one in Watts. “We’re hoping to develop a model that can be scaled up [to create] a really simple, easy way to transform neighborhoods,” Riley said.

So, what should you do if you know about a space that could make a great park in your area?

“Reach out to your council members, reach out to your Department of Recreation,” Kjer advised. She also suggested joining your neighborhood council’s land use committee to learn more.

The public is welcome to reach out to the Los Angeles Neighborhood Land Trust and the Trust for Public Land to receive guidance, Kjer said.

“There’s a lot of people that you can talk to, and that’s always a good place to start.”

Do you have a pressing question about L.A. and California? Ask us here.