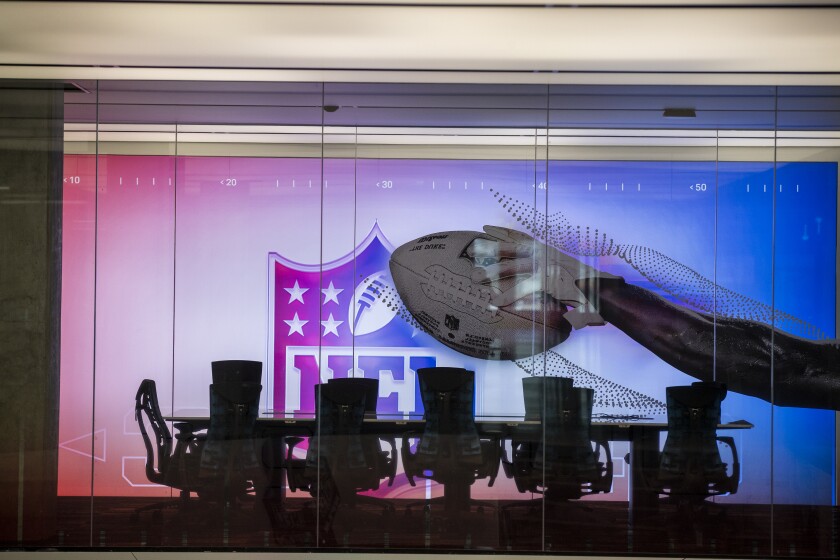 For a glimpse of the NFL’s media ambitions, step inside the league’s new studio and office complex in Inglewood.

There are five soundstages, including a 5,970-square-foot space for NFL Network’s “Total Access” and “GameDay” shows. The stage features 360-degree camera views, a catwalk for talent and a revolving neon red-white-and-blue NFL logo — hauled in from Nashville after the 2019 NFL Draft. The complex, which opens Wednesday, also includes a podcast studio and a camera-ready newsroom.

“This facility was designed for the world that we are in now, and what we think the world will look like in the future,” said David Jurenka, NFL Los Angeles general manager and NFL Media senior vice president.

With its posh new digs next to SoFi Stadium, the league is looking to turbo-charge its media strategy. While long working alongside its broadcast partners, CBS, NBC, Fox and ESPN, the NFL has steadily raised its own profile to reach millions of its fans. In an era of declining TV ratings and struggles to engage younger viewers, the league has placed greater emphasis on building its own media properties — the NFL Network, NFL Films, NFL RedZone channel, website NFL.com, NFL Game Pass and its popular NFL app.

“It’s how we reach the vast majority of our fans,” NFL Commissioner Roger Goodell said. “So we always have to set that bar higher, to give our fans a better experience, to give them greater access, to give them higher quality [and] to give them something unique.”

NFL executives declined to disclose the cost of building the new complex, but Jurenka acknowledged it was “hundreds of millions of dollars.”

The two-year construction was complicated by the coronavirus pandemic. The league spent an extra $3 million to redesign elements and install a cutting-edge air filtration system, “touchless” doors and faucets, plexiglass barriers, and, in the employee cafeteria, an extra chef station instead of a salad bar.

Despite the challenges, the NFL faced a hard deadline to finish its project before Thursday’s regular season kickoff. The league wanted the facility done, particularly because next year’s Super Bowl will be held in Inglewood.

Inglewood “is going to be … the epicenter of sports [and] we’re right in the middle of that,” Goodell said. “When content is created in that location, I think it gives us a unique opportunity that no other sport really has.”

The move to Inglewood comes as NFL looks to rebound from the 2020 season. Pandemic health protocols last year kept spectators away from many venues, including the new SoFi Stadium, depressing revenue for team owners. Television ratings for games fell about 7%. Still, the NFL held up well compared with other network TV programming.

According to New York-based research firm Standard Media Index, national advertising revenue for NFL Football increased 2% in 2020-2021 over the previous season. The NFL Network and other networks that broadcast games generated more than $3.7 billion in revenue. TV stations separately raked in hundreds of millions of local ad dollars for commercial time around NFL games.

Earlier this year, the league struck a series of new TV rights deals to fortify its financial foundation.

Those NFL TV rights deals doubled in value to more than $100 billion over the 11-year life of the agreements, which kick in with the 2023 football season. In addition to contracts with its longtime TV partners, the NFL signed an average $1-billion-a-year pact for 15 Thursday Night Football games each season to run on Amazon Prime Video starting in 2023. (The Fox network will broadcast this season’s Thursday contests.)

Walt Disney Co.’s ESPN+, NBCUniversal’s Peacock, ViacomCBS’ Paramount+ and Fox’s Tubi platform will have the rights to stream some NFL games — a high priority for the broadcasters and NFL.

The NFL also is experimenting with other ways to expand its base, including legal gambling. Last week it named Fox Bet, BetMGM, PointsBet and WynnBET as the approved sportsbook operators for the 2021 season.

“When we look at the NFL, it is an entity that has gone very far beyond just putting on games … and selling tickets for people to come and watch,” Ganis said. “It is developing into a full-fledged, global multimedia enterprise.”

“We’re not looking for capital here,” Goodell said. “But we’re looking for strategic partners that can help take our assets to another level and really continue to grow them.”

For 18 years, the NFL Network and NFL.com operated from an unremarkable three-story office building in Culver City.

“We were literally keeping our boards together with parts that we bought on EBay,” said Dave Shaw, NFL Media’s head of media operations.

The new space is wired to accommodate future upgrades. “This is scalable to any and all technology — from 4K, 8K to everything into the future,” Jurenka added.

The NFL is the Kroenke organization’s first tenant in its seven-story office tower that sits about 50 yards west of the stadium.

The NFL signed a long-term lease for the 214,063 square feet of office space and adjoining studios that add another 74,922 square feet. Gensler, the architect, worked with the NFL to custom-design the space, which includes aesthetics inspired by NFL’s iconography: Backsplash tiles were made specifically for the league — with X’s, O’s and little arrows to simulate game-day play calls. Conference rooms — there are more than 20 — are called “Huddle” spaces, and each is named after NFL action such as “Hail Mary,” “Flea Flicker” and “Blitz.”

“We are trying to bring in that NFL piece — without overdoing it,” said Alissa Lieppman, the NFL’s vice president and head of planning and culture.

Ceiling lights in the hallways resemble hash marks on the field. There is a spacious “living room” overlooking the new stadium for dignitaries and personnel of visiting teams who come to Los Angeles to take on the Rams and Chargers. The room contains a huge TV screen (one of more than 800 on-site), couches and a kitchenette with skim milk and old-school half-and-half.

About 850 of the NFL’s Los Angeles-based staff, including departments beyond NFL Media, will work out of the space.

There is a 60-foot mural, Gamechangers Hall, with renderings of NFL legends including Peyton Manning, Vince Lombardi and Bo Jackson, the work of more than 20 street artists. And each floor is equipped with a “mothers room” for women who are nursing.

“We have a lot of women coming up in the organization,” Lieppman said.