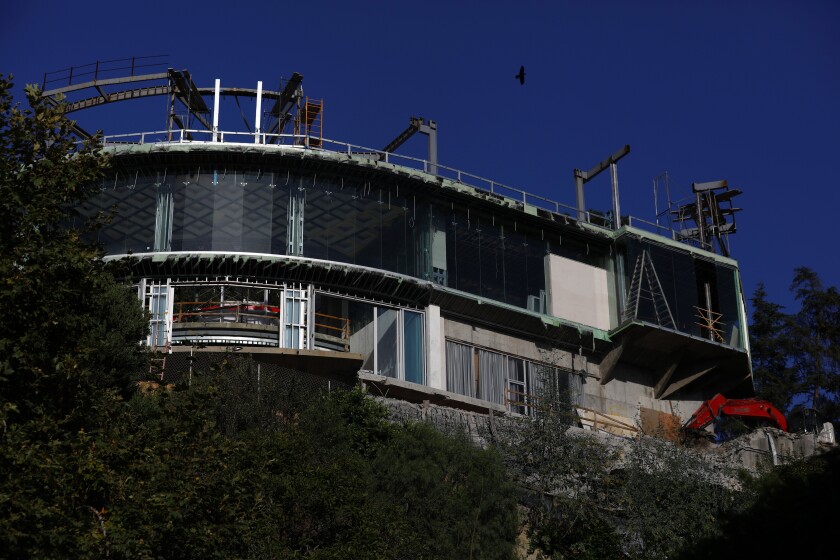 “This house will last forever,” developer Mohamed Hadid once said about his 30,000-square-foot mega-mansion perched in the hills of Bel-Air. “Bel-Air will fall before this will.”

An L.A. County court disagreed in 2019, declaring the massive, unfinished structure a “danger to the public” and ordering it to be torn down. Now, the infamous estate on Strada Vecchia Road will be auctioned off to the highest bidder.

The auction is the latest, and perhaps final, chapter in a saga that stretches back years filled with criminal charges, government investigations and heated courtroom battles.

Hadid — father to models Bella and Gigi Hadid and star of the reality shows “The Real Housewives of Beverly Hills” and “Shahs of Sunset” — is no stranger to lavish real estate projects, but the Strada Vecchia mansion might be his most ambitious to date.

He built the mammoth home both bigger and taller than city rules allow and crammed it onto a steep hillside lot of just over an acre, leaving neighbors below worried that it would slide down the hill and crush their homes.

They sued Hadid in 2018, citing construction violations. In December 2019, Los Angeles County Superior Court Judge Craig D. Karlan ordered it to be torn down because of an inadequate foundation.

After years of court battles that saw Hadid plead no contest to criminal misdemeanor charges and sentenced to community service and fines, the doomed home hit the market this year for $8.5 million, with proceeds of the sale going toward its destruction. In court, Hadid’s attorneys said the cost of the tear-down would be $5 million. 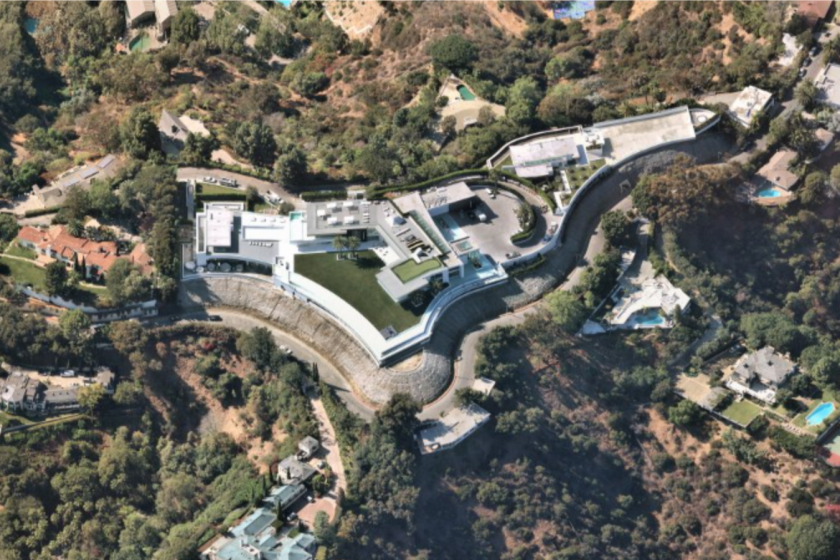 Foreclosure looms for Nile Niami’s infamous mega-mansion ‘The One’

The One, a 100,000-square-foot mega-mansion in Bel-Air, may be headed for foreclosure as developer Nile Niami owes more than $110 million in outstanding loans.

A possible deal fell through a month after it listed for sale. After the property languished on the market the last few months, state-appointed receiver Douglas Wilson Cos. ordered it to be auctioned off. Bids are due by Sept. 27, and the court will confirm the sale on Oct. 1. Potential buyers will have to provide a $250,000 refundable deposit in order to bid.

“This auction is about certainty,” said Todd Wohl, co-founder of Premiere Estates Auction Co., which is handling the sale. “The court and receiver elected to have it auctioned so they can ensure it will be sold by Oct. 1.”

Wohl added that the home’s destruction, which has been delayed while it’s been on the market, will be funded by the sale and will begin immediately after the court confirms the deal. He estimated the complete tear-down will take four months.

“Essentially, the buyer is getting a piece of dirt in one of the most prestigious markets on the Westside,” Wohl said. “The market will decide what it’s worth.”

According to Redfin, there are currently 18 pieces of raw land on the market in Bel-Air. The largest is a massive 264-acre spread listed at $70 million, and the smallest is a 2,500-square-foot lot near Stone Canyon Reservoir listed at $18,500.

Dubbed “the Starship Enterprise” by disgruntled neighbors, the dramatic mansion towers over the neighboring homes with a striking, curved exterior. Hadid’s original plans for the place included an enormous wine cellar and 70-seat Imax theater, as well as a series of bedrooms and decks that were never approved by the city.

The L.A. 'granny flat' built for climate change: Take a look at the eco-chic inside