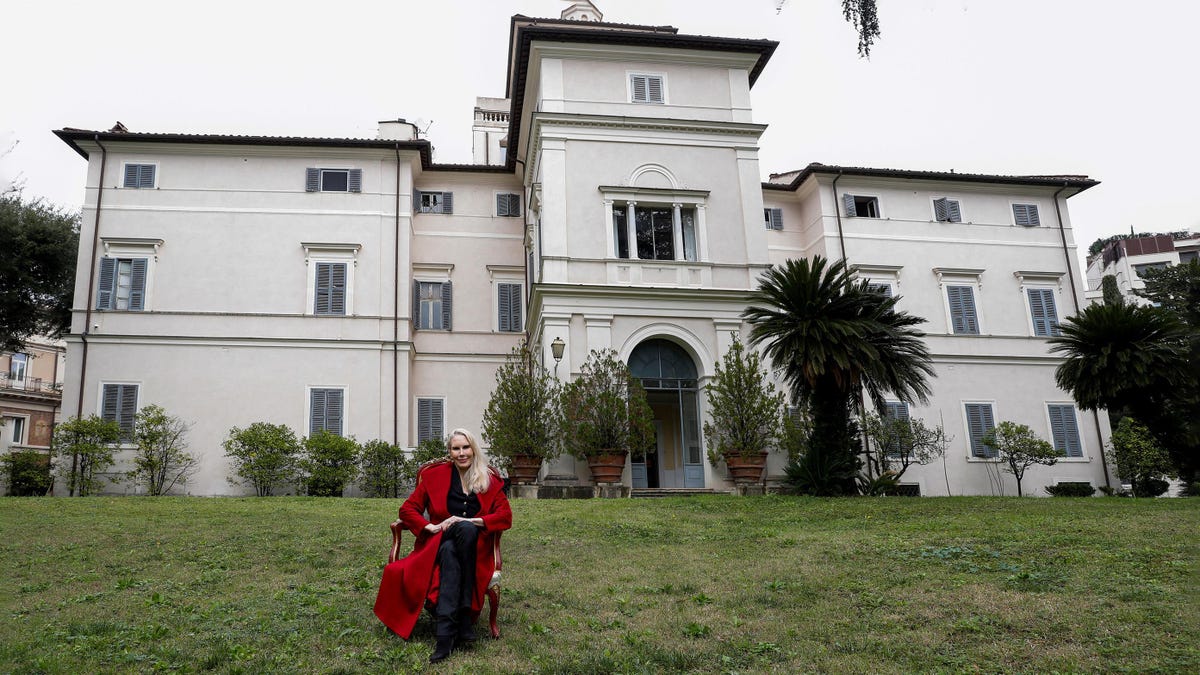 Rita Jenrette scandalized Washington in the 1980s when, as the wife of a disgraced congressman, she posed for Playboy. After reinventing herself as a New York real estate broker and eventually marrying into Italian nobility, she’s now saying arrivederci to the historic villa that’s been in her late husband’s family for 400 years.

Seated in a parlor of her lavish villa in central Rome—where Caravaggio painted his only known ceiling mural and Galileo once gazed at the stars from the roof—Her Serene Highness the Principessa Rita Boncompagni Ludovisi is feeling wistful about selling her late husband’s ancestral home.

“I just hope God brings an angel here that recognizes all that we’ve done, and honors Nicolò,” the 72-year-old Principessa says reclining near 16th and 17th century portraits of his aristocratic ancestors, who purchased the estate 400 years ago. “I’ll be satisfied—I’ve done all I can.”

The villa’s $532 million price—established by an Italian court earlier this year—just might soften the blow.

Villa Aurora, as it is widely known, sits near the highest point within Rome’s Aurelian Walls, near where some historians believe Julius Caesar hosted Cleopatra at one of his homes.  The 32,000-square foot villa and surrounding garden are all that’s left of a once 86.9-acre estate owned by the Ludovisi family since 1621. In 1885, most of the property was redeveloped into smaller lots to create Via Veneto, one of the world’s most glamorous streets.

A statue of the Greek god Pan long attributed to Michelangelo greets visitors in the garden, and on the ceiling in the main reception hall, Guercino painted a fresco of the goddess Aurora from whom the villa takes its name. Caravaggio’s only ceiling mural, “Jupiter, Neptune and Pluto” watches over a foyer, painted while the artist was still in his early twenties, before he killed a man in a duel and fled Rome. One art history expert hired by the court to appraise the ceiling, Sapienza University’s Alessandro Zuccari, estimated that the mural alone is worth about $350 million of the house’s astronomical price.

After all, paintings by Caravaggio are extremely rare. There are about 90 known works attributed solely to the artist, and some have reached nine figures in private sales. When Caravaggio’s Judith and Holofernes was up for auction in 2019, for instance, it was estimated to be worth as much as $170 million, but two days before the sale, it was announced the painting had been sold for an undisclosed amount to a customer who put in an offer that “could not be ignored.” The New York Times reported the buyer was billionaire hedge fund manager J. Tomilson Hill.

For years, Villa Aurora has been at the heart of a vicious inheritance struggle between the Texas-born Principessa and members of her late husband’s family that she says makes the drama on HBO’s Succession look like “child’s play.” She has now resigned herself to auctioning the home on the orders of an Italian court ruling after years of legal battles since her husband’s death in 2018. And if the villa sells for the court’s price, it would set the record for the most expensive home ever sold, topping the 2017 sale of a $361 million Hong Kong apartment complex on the Peak. Though she calls losing the home “devastating,” Villa Aurora marks another colorful chapter in Princess Rita’s dolce vita.

Principessa Ludovisi grew up far from the tallest hill in Rome, but says she felt a connection to the Eternal City at a young age. She was born Rita Carpenter in San Antonio, the daughter of millionaire oilman C. Hunt Carpenter and Reba Garlington, an heiress to a cattle fortune. She visited Rome for the first time at 16 with her older sister. Like all tourists, she went to the Trevi Fountain and made a wish—that she could “live in Rome and marry a Roman.” Unlike most who toss coins in the fountain, however, her wish came true—but not right away.

Long before she moved to Italy, the future Principessa was best known as Rita Jenrette, wife of Rep. John Jenrette, the Democratic congressman from South Carolina who was convicted of bribery and conspiracy in 1980 as part of the Abscam sting.

The next year, as her marriage was ending, she posed for Playboy in a nude pictorial and wrote an accompanying essay, “The Liberation of a Congressional Wife” in which she described having sex on the Capitol steps one night after a late House session. Even before her husband’s conviction, the Principessa wrote in Playboy that while living in Washington, D.C., she had already “been found guilty of an equally serious offense: not fitting in.” She wrote that her detractors believed she was “too flashy, too blonde, too outspoken” to be a politician’s wife. “If you are living a public life and you don’t speak out openly and honestly,” she wrote, “then what have you lived for?”

The Principessa has since said that she exaggerated the nature of that night on the Capitol portico, telling the Washington Post in 2011 that it was “a romantic moment but not a salacious one.” She also doesn’t regret the Playboy photos, even with the scandal it caused in 1980s Washington. “If that’s the worst thing I’ve ever done, then shoot me,” she says. “My husband, Nicolò, was always proud of me.”

After leaving Washington, the Principessa tried reinventing herself as an actress in Los Angeles. She appeared on Fantasy Island in 1982, in movies like 1984’s Zombie Island Massacre and in 1986 appeared Off-Broadway in A Girl’s Guide to Chaos. She said one of her favorite jobs was working as a correspondent for the info-tainment series A Current Affair from 1988 to 1990. When that path stalled, she moved across the country again and made another career pivot—working for investment firm Bridgewater under Ray Dalio before becoming a high-rolling real estate broker in New York, so she didn’t “have to get married again to live decently,” she laughs.

This time, she excelled—she estimates that she helped broker $1 billion of real estate transactions between 1995 and 2001, with deals spanning from the East Coast to Arizona. Forbes estimates she made at least $10 million. She also cofounded a real estate company called Sullivan Jenrette, backed by Britain’s Intercapital investment firm.

Her biggest deal came when she helped broker Donald Trump’s $800 million purchase of the General Motors building in 1998. Decades before his days in the White House, Trump made an impression on her when he told her, unprompted, that he was a billionaire. “No one has ever said to me, ‘I’m worth $3.5 billion,’ and I’ve been around a lot of wealthy people,” she says. “So it kind of took me back. It was a surprise.” (According to the Forbes 400 that year, Trump was worth $1.5 billion.)

It was during her time as a Manhattan real estate broker that she also met her second husband, His Serene Highness Prince Nicolò Boncompagni Ludovisi, then 61, through mutual friends in 2002. She was told he was an Italian prince, interested in building a hotel at one of his palatial family properties located outside of Rome. She was unimpressed.

“For heaven’s sakes, everybody in New York calls himself a prince,” she recalls, but she agreed to fly to Rome for a few days to see the property. When Nicolò picked her up from the Grand Hotel Flora —located in Ludovisi, the Roman district named after his family—she thought the prince was charming, down-to-earth and she liked that he spoke English with a British accent. The two never built that hotel but began dating and were married seven years later in 2009.

The couple moved into Villa Aurora shortly after they began dating and undertook the hard work of restoring the property, which had fallen into disrepair and was written off as beyond salvation by historical circles. The Principessa estimates they spent at least $10 million on renovations.

“I knew how important it was to him, and it became very important to me,” she says, “We gave up everything. I didn’t go out shopping and buy Birkin bags and shoes and the latest fashion—or anything else at all.”

Nicolò was a private person and hesitant about opening his family home, but she convinced him to share the villa with the world—or at least the occasional paid private tour. She walked students and other visitors through their villa, sometimes daily, for years, sharing anecdotes about its rich history in her unmistakable Texas accent. She also set out to digitize the villa’s bountiful archives, which include letters from Marie Antoinette and Louis XVI.

The pair spent many hours lounging in her favorite part of the house, the Landscape Room, looking at museum-worthy murals of nature scenes by Pomarancio, Paul Bril, Giovanni Battista Viola, Domenichino and Guercino. The two lived happily together until Nicolò’s death in 2018. “I couldn’t have asked for a more wonderful life,” she says of her time with her late husband.

If the sale of Villa Aurora is completed next year, the Principessa is unsure if she’ll even stay in Italy. She floats the idea of renting an apartment in Rome but says she’s considering returning to New York. She’s recently been linked to Manhattan restaurateur Nello Balan, whom she has leaned on for support over the past year amid the inheritance dispute. “We’re each other’s cheerleaders,” she says.

As directed by the court, the Principessa would get half of the proceeds, while the other half will go to her late husband’s three sons from a previous marriage. The Italian government also has the right of first refusal and could step in to match the final auction price to buy the property. (A recent online petition has called on Italy’s Ministry of Culture to do just that.)  It’s unclear if it will do so, especially considering the likely nine-figure price tag. The Principessa’s biggest hope is that Villa Aurora’s next owner continues the research and preservation work she’s poured into the home, and keeps it open to the public as she has for all these years.

After all, Villa Aurora still has plenty of mysteries to uncover, she says. A study by Indiana University found that Roman ruins lie underneath the home. Ever the shrewd real estate broker, she’s also convinced that a missing telescope once belonging to Galileo is still somewhere on the property. The media-savvy Principessa then floats names like Elon Musk and Jeff Bezos when asked who she hopes will buy the villa.

“It’s going to take a billionaire to do this,” she says. “Not just a millionaire, a billionaire to come here and bring this back to its former glory. I just hope and pray that this billionaire, whomever this person might be, sees the value of the history of this house.”