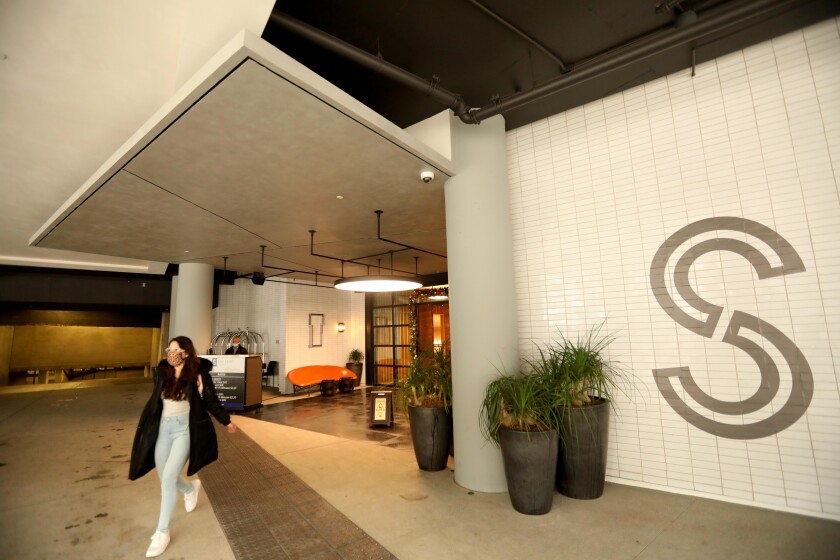 Hotel bookings in Los Angeles returned to 100% of their pre-pandemic levels in October and November 2019, considerably above the national average, as many innkeepers scrambled to keep up their standards amid staffing challenges and supply chain issues.

L.A.’s comeback milestone was reported by international hotel commerce platform SiteMinder, which thousands of hotels use to sell rooms online.

And although Los Angeles hoteliers are doing better than most, the itch to travel domestically and perhaps visit friends and family is widespread as people look past the pandemic.

“There’s pent-up demand for vacations that were deferred, for weddings that were canceled,” hotel sales broker John Strauss of JLL said, and the threat of new coronavirus variants hasn’t stopped the renewed rush to move about the country.

“Despite the head wind of Omicron, there is a definitive and strong appetite” to travel, he said.

Most hotel guests hit the road for pleasure instead of business. The reopening of family attractions such as Disneyland, Universal Studios Hollywood and SeaWorld has prompted many Americans to drive or fly to Southern California, Strauss said. “Those are big drivers” of tourism. 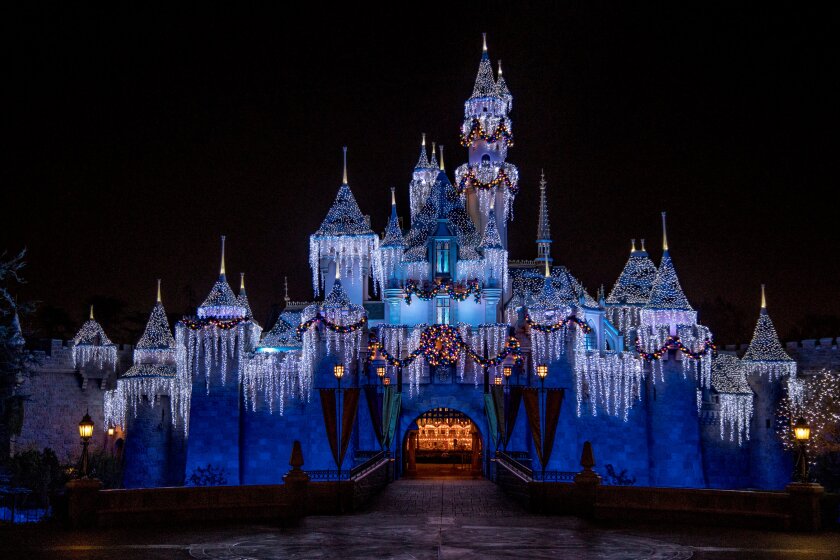 Visiting Disneyland over the holidays? Use the new Genie app (and follow these tips)

The holiday season draws big crowds to Disneyland and California Adventure. These tips can help you make the most of your visit at a busy time.

Many visitors to Los Angeles come from elsewhere in California, which is unsurprising because a lot of travelers choose destinations they can reach by car, said Bernhard Ballin, regional vice president of the Americas at SiteMinder. Arizona, Nevada, Texas and New York have been among the other states that have sent the highest percentage of hotel guests to L.A.

The national average for hotel bookings is 89.57% of 2019 numbers, according to SiteMinder. San Francisco hotels, in contrast, are running at about 50% of pre-pandemic levels, the data show.

International travel remains more difficult than usual with pandemic fears and months of restrictions, including quarantines, which means fewer visitors have been coming to L.A. from abroad than was common in years past.

In the last six months, more than 15% of visitors to Los Angeles were international guests, with the majority of bookings coming from Mexico, Argentina, Britain, Belgium and Spain, Ballin said.

Hoteliers are benefitting from the pandemic-related shift among U.S. employers to allow their employees to work remotely instead of in the office, said Rob Lowe, whose company recently opened a full-service hotel called the Shay in Culver City’s Ivy Station complex.

“People have more flexibility” working remotely, he said. “If they don’t have to be in the office on Fridays or Mondays, they can extend their weekend stays and work from the hotel.”

Lowe is co-chief executive of a Los Angeles real estate company called Lowe, which owns and operates hotels and other commercial properties in the U.S. Among its inns is Terranea Resort on the coast in Rancho Palos Verdes.

The Shay opened in October, and occupancy is already averaging about 50%, Lowe said, serving leisure travelers on weekends and a mix of leisure and business guests during the week. 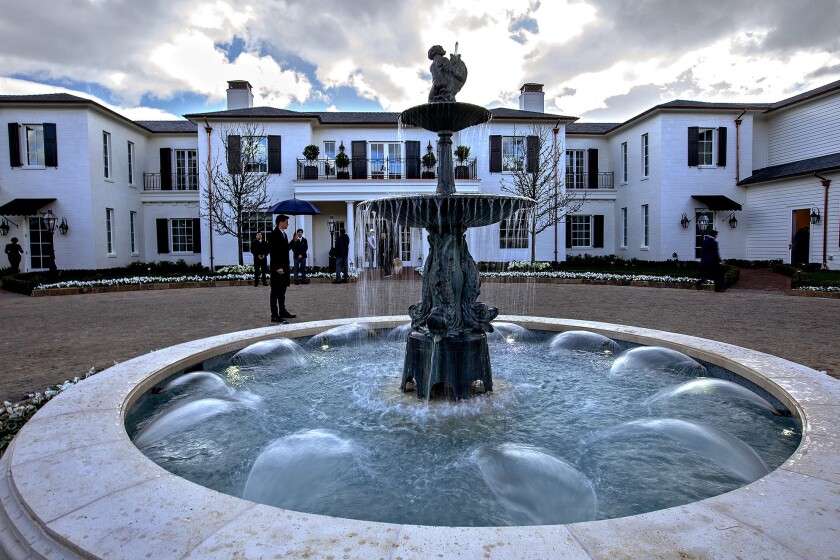 Demand is increasing for multi-month stays at luxury resort properties and urban hotels, as wealthy people look to shelter remotely in style.

The comeback in hotel stays has been driven by higher-than-average leisure travel, but group event bookings are also gearing up after all but disappearing during much of the pandemic. Leisure travelers, people traveling for business reasons and groups that gather for retreats and other shared interests such as weddings are the three main categories of hotel guests.

California COVID-related restrictions on indoor gatherings put a damper on group business in the state in the first half of the year, Lowe said. Group business started to come back in the summer and accelerated in August. In September, a surge in infections from the Delta variant provoked a spate of cancellations.

The lull was short-lived, Lowe said. “Those cancellations kind of magically ended after September,” he said, and the following months have been “very strong.”

Nationally, Strauss said, “there is a major return of pent-up group business” as people who delayed meetings and get-togethers put them back on the calendar. Top destinations are large resort hotels and properties near entertainment venues such as theme parks.

The pace of growth suggests “extremely strong” group bookings in 2022 and 2023, he said, and the U.S. Travel Assn. forecasts that domestic business travel spending will increase more than 50% next year.

Business travel is starting to recover, Strauss said, but has not reemerged as a priority for companies in the age of Zoom and other online meeting services.

Concerns about Omicron and other coronavirus variations remain a factor in people’s travel planning, yet Strauss predicts that international travel will be the next category to surge as quarantine requirements and other restrictions start to lift.

Last month, the U.S. fully reopened its borders with Mexico and Canada and lifted restrictions on travel that covered most of Europe. The restrictions were among the most severe in U.S. history and frustrated many would-be visitors from overseas.

Among the luxury hotels in driving distance of Los Angeles is Rosewood Miramar Beach, a seaside resort in tony Montecito, where rooms typically rent for more than $2,000 a night, even in the winter. The hotel closed for about two months early in the pandemic in 2020 but has been well occupied since, said Jackie Levy of Caruso, the Los Angeles company that owns the property. 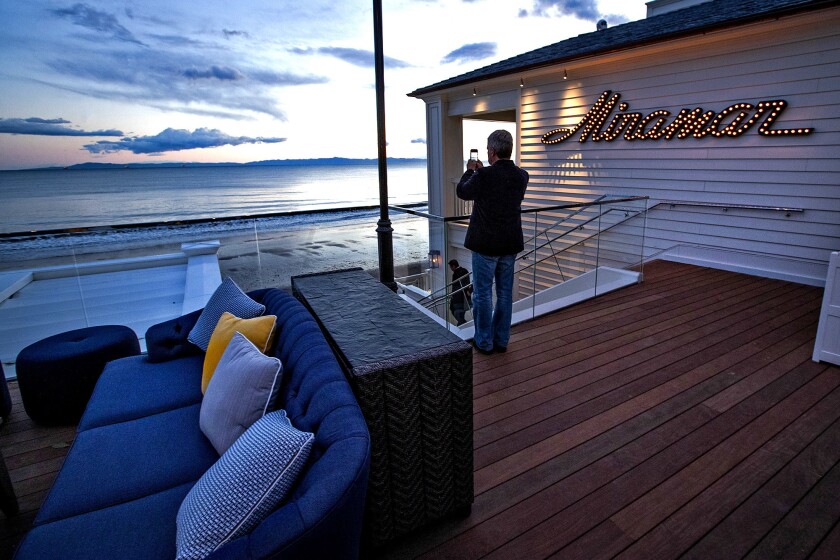 In a quiet garden at the Rosewood Miramar Beach resort in Montecito is a white marble statue of the Buddha, laughing while four small children clamber up his side.

Levy declined to discuss the Miramar’s precise occupancy and revenue but said Thanksgiving week was sold out and that its event business such as weddings has been booming for the last six months.

“We have two or three events every week through December and into next year,” said Levy, chief revenue and business officer of the company founded by developer Rick Caruso. Most of those are weekend weddings, which start at $29,000, but midweek business retreats are also starting to reappear.

Celebrity attention has raised the profile of the Miramar, a longtime family beach getaway that Caruso took over and rebuilt in 2019. In October, drummer Travis Barker of the pop-punk band Blink-182 proposed to reality television star Kourtney Kardashian in a widely publicized moment on the hotel’s beach.

For more typical travelers, the destination of choice is commonly a familiar brand. Almost 1 in 4 Americans say a big chain or resort is where they will stay on their next trip, Ballin said. Boutique and luxury hotels have grown in popularity, though, and are the preferred types of accommodations for 26% of travelers, up slightly from before the pandemic.

As guests return, many hotels are struggling to get the routine supplies they need to operate.

Nearly 3 in 4 operators say supply chain issues are hurting their revenue, according to a recent survey by the American Hotel & Lodging Assn. They’re facing delays or increased costs in acquiring basics such as cleaning supplies, linens, food and beverages.

Lowe said his company has big problems with the supply chain when it comes to building and renovating hotels. Bathroom vanities, for instance, are prebuilt in Asia and have been delayed at sea.

“It’s the same with furniture,” he said. “It comes in bits and pieces over months instead of right on time.”

An ongoing challenge for hoteliers that may last longer than supply chain woes is a shortage of employees, especially in their dining areas and bars, Lowe said, reflecting a nationwide shortage of food service workers willing to work for the wages the industry commonly pays.

“Most hotels and restaurants have fewer servers than they need and strong demand,” Lowe said. Labor-saving measures implemented during the pandemic such as putting menus on QR codes and having patrons order from electronic devices may be here to stay, especially in more casual venues.

“We see that as a permanent change because we are definitely under-supplied in labor,” Lowe said, “and we don’t see that changing.”