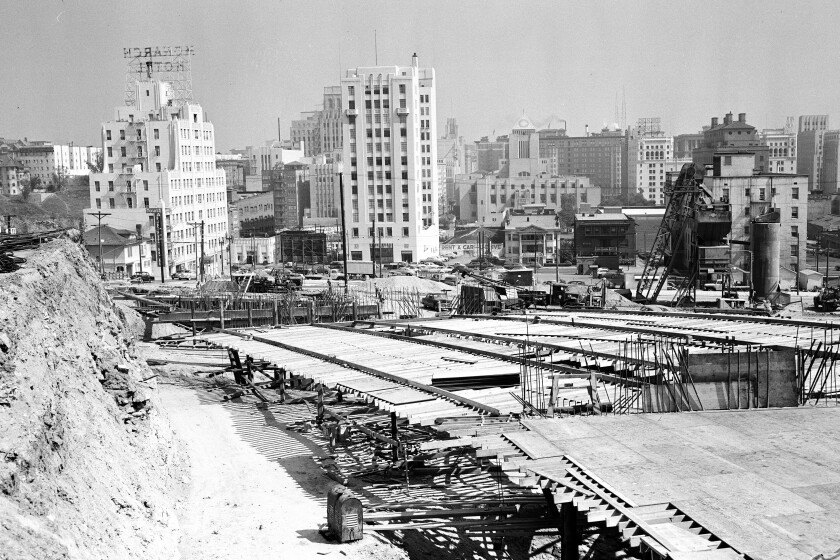 To report on people who have lost their homes because of highway projects in the modern era, The Times analyzed data submitted by states to the Federal Highway Administration each year since 1991.

The total — more than 82,000 households — is an undercount because many states have failed to consistently report how many homes were taken each year for road projects, despite federal guidelines on doing so. The average household size in the United States is 2.6 people, and The Times used that figure to estimate that more than 200,000 residents were displaced.

The national figures do not break down displacements by highway project. Before construction occurs, federal guidelines require state departments of transportation to estimate a project’s number of displacements and determine whether it will disproportionately affect Black and Latino residents. However, there are no such rules to track who is actually displaced once the road is built.

Construction of the U.S. Interstate Highway System tore through the nation’s urban areas with freeways that, through intention and indifference, carved up Black communities

To assess racial and ethnic impacts, reporters requested displacement figures for the largest projects since 1991 in the five states that reported the highest number of displacements: California, North Carolina, Texas, Florida and Mississippi. The Times defined the largest projects as those with 100 or more households displaced. Reporters also requested databases, maps and environmental impact and relocation reports from each of those states. The records made available by state transportation departments showed 22 such projects affecting more than 6,300 families.

Using U.S. Census Bureau data, The Times calculated the share of Black, Latino and other nonwhite residents in census block groups or tracts directly intersected by the freeway projects.

If a project cut through an area that was majority nonwhite or if the share of nonwhite residents in the project area exceeded the share of the surrounding counties by more than 10 percentage points, that project was considered to have a disproportionate impact. That approach follows guidelines used by the U.S. Department of Transportation and the California Department of Transportation.

The analysis found that nearly two-thirds of the more than 6,300 families were displaced by projects that disproportionately impacted communities of color. To validate its methodology, The Times consulted with academic experts who research racial disparities and the U.S. Interstate Highway System.

The projects analyzed by The Times were heavily concentrated toward more recent years because of limitations in historical data kept by states. Agencies also didn’t maintain records for some highway projects with potential for significant displacements. The Texas Department of Transportation, for instance, did not know how many families were forced out to make way for two Dallas-area toll roads in recent decades because the projects were partnerships with private companies.