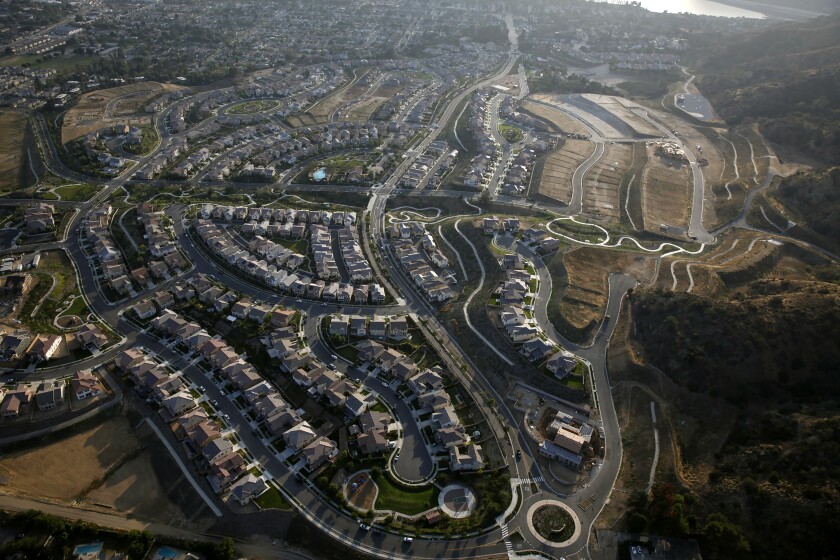 The poll, by the Los Angeles Business Council Institute, done in cooperation with the Los Angeles Times, provides one of the first tests of public reaction to the new laws, which could bring about a dramatic change to California’s development landscape.

They were a culmination of a years-long debate in Sacramento over local zoning restrictions that can drag down housing production. The fight stirred intense opposition among homeowner groups, especially in Los Angeles, where opponents said the proposals threatened to destroy single-family neighborhoods.

So far, the poll indicates, a majority of voters have not adopted that dire view.

Countywide, 55% of voters support Senate Bill 9, which lets property owners construct duplexes, and in some cases fourplexes, in most single-family-home neighborhoods statewide. By contrast, 27% were against the law while 18% were undecided.

Senate Bill 10, which lets local city councils expedite construction of apartment complexes of up to 10 units near transit hubs and urban infill areas, including in single-family-home zones, gets stronger support. It has support of 68% of county voters with 13% opposed and 19% undecided.

The poll showed a sharp difference between homeowners and renters, especially on SB 9. Renters backed the law by more than 3 to 1, while homeowners were closely divided, the poll found.

Bungalows and backyards also have long been seen as a key to the “California dream” of modest, middle-class living.

But such homes continue to become less and less affordable. The median sales price for an existing single-family home statewide was $798,440 in October, according to the California Assn. of Realtors, an increase of more than 12% over the last year. In L.A. County, the median sales price of $848,970 was almost 14% higher than last year.

Advocates for the new laws contend that they can help moderate prices by spurring home building in areas that have been off-limits to new growth.

“The housing affordability crisis is undermining the California dream for families across the state, and threatens our long-term growth and prosperity,” Gov. Gavin Newsom said when signing the laws in September.

“Making a meaningful impact on this crisis will take bold investments, strong collaboration … and political courage from our leaders and communities to do the right thing and build housing for all.”

Gov. Gavin Newsom signed legislation that allows more than one unit to be built on lots zoned for only one. It sounds technical, but it’s a major change in California housing policy. Here’s what it means.

Renter support for SB 9 likely stems from the hope that the law may make it easier to own homes, said Mark DiCamillo, polling director at UC Berkeley’s Institute of Governmental Studies, who acted as a consultant for The Times on the new poll.

“I think a lot of renters are trying to break into the homeownership realm,” DiCamillo said. “They see this as a potential way to expand supply and get smaller units to enter the market.”

DiCamillo said he was surprised that even a plurality of homeowners backed the new law, given its potential to disrupt single-family-home neighborhoods.

The findings, including among homeowners, he said, “have to be encouraging for proponents of the new law.”

Among L.A. County Democrats, 59% were in favor of SB 9, according to the poll. Republicans were narrowly divided, with opponents slightly outnumbering supporters, making them the only significant demographic group against the law, the poll found.

In the legislative debate, however, disputes over the new law weren’t neatly partisan.

The Los Angeles City Council, where 14 of 15 representatives are Democrats, overwhelmingly opposed the two laws, with West L.A. Councilman Paul Koretz, a Democrat, saying they would “kill communities and the environment.” Some advocates in South L.A. opposed the new laws on the grounds that they would promote gentrification.

Some Republicans in the state Legislature were supportive of the two laws, arguing that they expand homeowners’ property rights.

Already, some cities across the state are planning policies to blunt the effects of SB 9. Some, for example, would limit the size and height of new developments, mandate parking spots and require that additional housing units be rented only to those making moderate or low incomes.

Legal challenges over such measures are likely.

The Los Angeles Business Council Institute conducted a survey in cooperation with The Times from Oct. 27 to Nov. 3 to examine Angelenos’ views on homelessness. Questions were posed by telephone and via the internet to 906 Los Angeles County voters. This week, The Times is publishing a series of stories on the poll results.

It’s also possible that the new laws will not make a dramatic difference.

The laws don’t prohibit the construction of new single-family homes. SB 9 allows property owners to build duplexes — or fourplexes — on their land if they want to, but doesn’t require that anyone do so. Any changes inaugurated by SB 10 require a city council’s approval first.

Also, other zoning changes in recent years have already made it a lot easier for property owners to build smaller secondary homes — known as granny flats, casitas or accessory dwelling units — on parcels zoned for single-family homes.

The poll was conducted between Oct. 27 and Nov. 3 among 906 registered voters in L.A. County. The sample was split for the questions on SB 9 and SB 10, with roughly half the voters asked about each bill. The margin of error for those results is 4.5 percentage points in either direction.

Housing Inventory Plunges To A Record Low In November