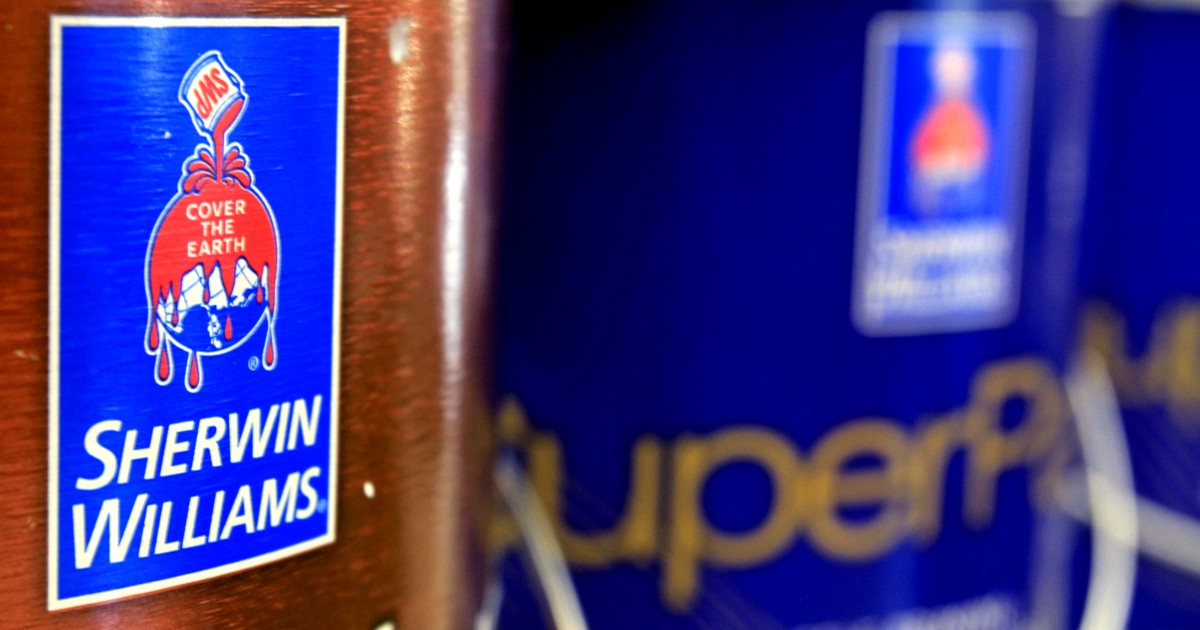 Hugo Granadino recently stopped by the Sherwin-Williams paint store in Inglewood to pick up some rollers and brushes. He’s repainting the den of his South Los Angeles home.

After the purchase, Granadino, 40, took a look at his receipt and was surprised to see a 4% “supply chain charge.”

There’d been no advance warning that a surcharge was being imposed — it was just quietly tacked on at the checkout counter.

Granadino called the store to ask what’s up with that.

“The guy said that because there’s a shortage of their raw materials, they have to charge more,” Granadino told me.

Some context: Practically everything has gotten more expensive in recent months because of pandemic-related shortages and supply-chain issues.

Consumer prices rose by a larger-than-expected 5.4% last month from a year ago, according to the Labor Department. That’s the sharpest increase in 13 years.

The Inland Empire posted the nation’s highest inflation rate in September, quadrupling to 6.7%.

Food, energy, housing — all more expensive. This puts a financial squeeze on many households as the economy gradually recovers from the worst conditions since the Great Depression.

Although chronic shortages of microchips and medical supplies have received the most attention, many components and raw ingredients used in a wide variety of products also have been harder to find, pushing consumer prices higher.

Count paint among them.

Cleveland-based Sherwin-Williams, the country’s largest paint company, warned investors last month that its manufacturing costs were rising and that this would result in higher retail prices.

“The persistent and industry-wide raw material availability constraints and pricing inflation we have previously reported have worsened, and we do not expect to see improved supply or lower raw material pricing in our fourth quarter as anticipated,” the company’s chief executive, John Morikis, said in a statement.

But Sherwin-Williams apparently chose not to raise prices in a straightforward fashion. Instead, it slapped a surcharge onto paint sales.

This is an important — and shifty — distinction. It’s also a growing trend in the business world that needs to be stopped.

“It’s a sneaky way to hide the true price of the product,” she told me, “but a great way to annoy your customers.”

Granadino’s reaction to finding a surcharge on his paint bill is indicative of consumers’ unease with having to be constantly vigilant for added fees.

“Maybe they think we’re too dumb to understand what they’re really doing,” he said.

In Sherwin-Williams’ case, what they’re really doing is allowing themselves to advertise normal prices but jacking up customers’ cost by 4% at the cash register — after your paint’s been mixed and when most people probably won’t walk away from a purchase.

What they’re also doing, as Engstrom observed, is preventing consumers from effectively comparison shopping. If two brands of paint are advertised at the same price, but one ends up being 4% more expensive at the register, you’ve been misled.

In May I wrote about Frontier Communications making internet customers pay a $6.99 monthly “infrastructure” surcharge to cover the cost of routine network maintenance. That’s on top of a service charge that can run $80 a month.

A couple of years ago, Amoeba Music in Hollywood tacked a 35-cent “wages and benefits” surcharge onto customers’ bills. The company wanted to defray some of its personnel expenses without charging more for CDs and DVDs.

Similarly deceptive fees have been imposed by wireless carriers, cable companies, hotels, restaurants and other businesses.

I asked Sherwin-Williams to clarify the rationale for its “supply chain charge.”

If the company’s cost of business has gone up, I asked, why not just raise the retail price of its paint? Why break out the price hike as a surcharge? Is this fair to customers?

Julie Young, a Sherwin-Williams spokesperson, answered none of these questions.

Instead, she said this: “Sherwin-Williams announced a 4% surcharge effective mid-September until Dec. 31, 2021, in the Americas Group operating segment.”

And that’s it. “The company,” she said, “has no additional comments to provide.”

The solution is simple: Pass a law requiring that consumer prices be all-encompassing. In other words, require that the shelf price include all costs, including taxes and fees.

That’s how they do it in Europe. The European Union says consumers “have to be clearly informed about the total price, including all taxes and additional charges.”

For consumers, such a system means the price you see listed in stores is the price you’ll pay at the cash register. This creates a level playing field, forcing businesses to compete head to head on pricing.

Expect more surcharge shenanigans as we emerge from pandemic mode. Many businesses will be keen to recover higher manufacturing or wholesale costs, or past losses, without looking like they’re doing just that.

Granadino, for one, has had enough of these dishonest tactics.

“If your costs are higher, raise your prices,” he said. “Don’t try to trick us.”

Life is hard enough. Consumers shouldn’t have to be constantly watching out for companies playing fast and loose with pricing.

Oh, and Sherwin-Williams? Color me disappointed.

David Spade buys a modern mansion near the Comedy Store for $13.85 million