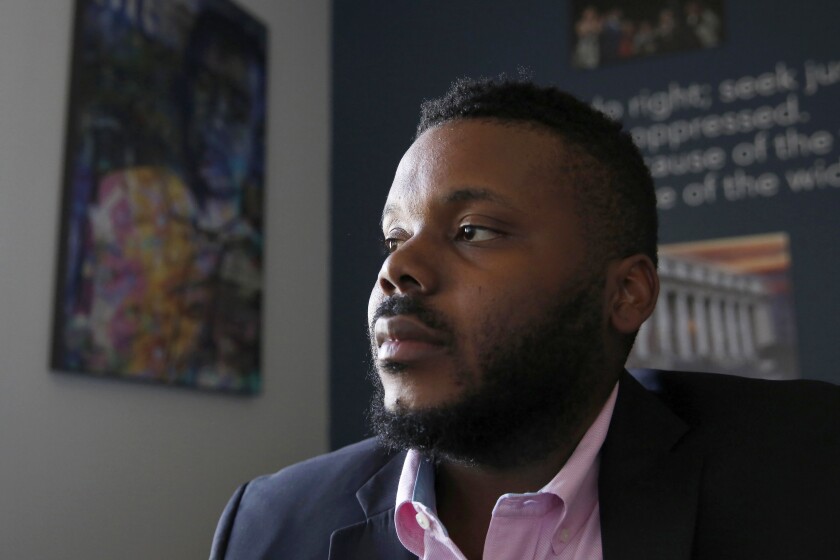 Pam Lumpkin knew it was time to leave Brentwood.

For more than a decade, she and her husband, Emmanuel, had lived in the mostly white, mostly wealthy Westside enclave. They made friends there, built careers there and raised kids there. But their priorities changed not long after the arrival of daughter No. 3.

“It was so hard to find a school with more than a few African American families,” Lumpkin told me. “I needed her to see there are lots of families like us. I needed her to grow up where I did.”

So, when an aunt died, leaving Lumpkin with a stately but dated house in the historically Black neighborhood of View Park, “we ran back,” to South L.A., “which people couldn’t believe.”

Admittedly, this was in 2011, back when many of the neighborhoods south of the 10 Freeway weren’t seen as particularly desirable to the broader, whiter home-buying public.

A decade later, everything has changed.

Column: Who is buying those expensive houses in South L.A.? Is it really just white people?

Even as longtime residents are getting priced out, a small number of Black families who can afford it are moving in. The question is whether more will follow.

For longtime homeowners, many of whom are elderly and Black, the temptation to sell to a house flipper or a developer is at an all-time high. Equally high are the economic barriers for younger Black families who want to buy into a South L.A. neighborhood for the first time.

Ask many residents and they’ll call what’s happening a crisis of unchecked gentrification and displacement. They’ll curse opportunistic developers in one breath and, in the next, denounce a new state law that allows apartments and condos to be built on land that was previously designated for only one house.

She is among a small but growing group of Black Angelenos who, though torn, prefer to see what’s happening in South L.A. as an opportunity.

One that if seized by enough Black people could lead to an unprecedented transfer of generational wealth and, by extension, slow the pace of gentrification. Or, if squandered, could put the neighborhoods that have long been at the center of Black life in Southern California at further risk of cultural erasure.

No pressure or anything.

“The opportunities are out there for us,” Lumpkin assured me. “We just have to get educated.”

I’m always a little skeptical of anyone who leans too heavily on the “there’s opportunity in a crisis” platitude. Probably because so many politicians conveniently peddled it during the worst of the COVID-19 pandemic.

Unfair maybe, but that was my first thought about Lumpkin. She’s a real estate agent who has developed a niche market in South L.A., selling homes to an exclusive clientele of Black professionals, and renovating and renting homes for others. This time of crisis has presented plenty of opportunities for her, if not always for everyone else.

But still, our conversation got me thinking — and reading.

A recent report from the Insight Center crunched new numbers about the nation’s decades-old racial wealth gap. Among the findings: The typical Black household is worth just $24,100, compared with $188,200 for the typical white household. That’s about 12 cents for every $1.

Get the latest from Erika D. Smith

Commentary on people, politics and the quest for a more equitable California.

Most — but certainly not all — of the blame for this is tied to equally longstanding disparities in homeownership, for that’s how most Americans build generational wealth.

In 2019, just 41% of Black families in California owned their homes, compared with 68% of white families. In fact, for the entire decade starting in 2010, the share of Black Californians who owned was lower than it was in the 1960s, when it was legal to discriminate against Black would-be homebuyers.

“Some of you may be asking yourself why is this action relevant today,” she said at a news conference. “We’re in a county of 10 million, and 5 million of our residents are what we call liquid-asset poor.”

For a long time, though, the Black residents of South L.A. were the exception, as many owned their homes. This didn’t happen by accident; it happened because Black people were limited to living in certain neighborhoods by redlining and restrictive covenants.

Yet even after those racist policies were banned, home prices in South L.A. remained suppressed well into the late 20th century. It’s only because of California’s extreme housing shortage that prices are now rising.

Now, all of a sudden, Black people who grew up poor or working class and managed to buy a modest home in the ‘60s and ‘70s — and, in some cases, pay it off — are finding that they own property that’s extremely valuable.

In many cases, it’s a first for their families, this prospect of passing along real wealth to the next generation. After all, it’s one thing to inherit a house worth $350,000 that needs $100,000 worth of work. It’s quite another to inherit the same house, but it’s now valued at $1 million. There are only a few cities in the country where that’s even possible for Black people.

I spoke to several current and former Angelenos who have found themselves in this situation. Among them, Maurice Mouton, who lives in a house in rapidly gentrifying Leimert Park that his parents left to him and his siblings in 2009.

Until fairly recently, he thought most of the money he would pass down to his sons would come from life insurance. He didn’t think he’d ever own a home that’s worth so much. “Never,” he told me multiple times, almost in a whisper.

But now Mouton said he has new concerns because one son is “a very good money manager” and the other son is not. It has become a frequent topic of conversation with his wife, Lydia.

“I grew up with a solid base, you know, but no wealth,” Mouton, 74, said, recounting a long career at Southern California Gas Co. “So, now it’s like, well, what do we do?”

Numerous studies, including one this month from the National Urban League, have shown that a disproportionate number of Black Americans lack financial literacy skills, particularly when it comes to understanding risk and investing.

This is one reason why Lindsay Barbee, a Yale grad with executive experience at WeWork, is managing her grandmother’s house in Windsor Hills on her family’s behalf.

Situated on a quiet, hilly, tree-lined street with a stellar view of SoFi Stadium, the home is full of family photos that still line the hallways and plush mustard green carpet that still covers the floors. Barbee is planning a complete renovation, even taking advantage of that new state law to add an accessory dwelling unit in the backyard. Then she’ll rent it.

But just sorting through her grandmother’s finances to find and pay all the bills on time has been harder than expected. Everything is on paper. Others with less experience and a more immediate need for cash might have given up and turned to a house flipper or a developer, the true architects of gentrification.

Barbee told me about elderly neighbors who own their homes but have no children to whom to leave an inheritance. Or who have children who have been in and out of prison, or who have struggled with drug addiction or who lost their lives to COVID-19.

This brings me back to Lumpkin and her talk of seizing opportunities in South L.A. She tells those who will listen: “Don’t sell your house if you’re Black and you’re from this neighborhood. Don’t sell your damn house!”

She’s right, of course. So was Nipsey Hussle when he was trying to buy back the ‘hood and telling everyone else to do the same.

But the sad fact is, for many, it will be impossible. Black Americans continue to earn less in the workplace than white Americans do, regardless of educational attainment, and remain disproportionately prone to generational poverty.

“Not a lot of folks have the capital to invest the way my cousin and I did,” admitted Brian Johnson, who along with a cousin, Ashley Glossen, recently inherited a home in View Park from an uncle.

Even though neither Glossen nor Johnson lives in California, they chose to keep the house rather than sell it to “outsiders” because was “important for our family’s legacy,” he said. It was first purchased by their grandfather in the 1940s. 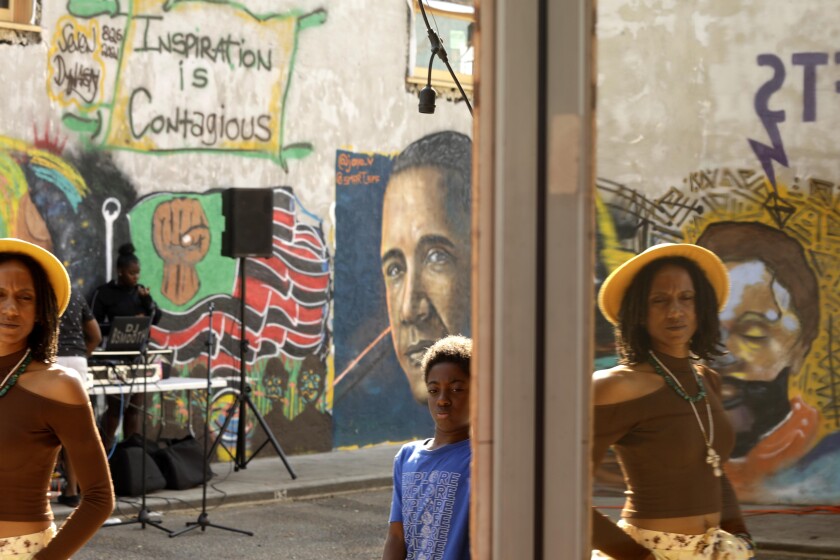 Column: ‘We may lose this.’ Despair over gentrification reaches new depths in South L.A.

But the sprawling ranch was dilapidated, so turning it into a rental meant sinking a “healthy amount” of their own money into fixing it up.

“I hope that folks, specifically Black folks, understand the importance of keeping a property, renovating that property and understanding that it’s going to just go up in value,” Johnson said. But, he added, “most Black folks are in a situation where their finances aren’t right.”

Cheryl Danner, who, along with her sister, decided to turn their elderly mother’s home in Baldwin Village into a rental, had similar hopes and fears.

“They want what they consider their inheritance and they want it right now,” she told me. “They have three or four kids, and they want to split it because they want to do different things. I would hope that they would keep it, but people feel like [investment properties] are too much work.”

Despite all that, Lumpkin is optimistic about what’s ahead for South L.A.

And it’s almost certain that home prices will continue to rise.

“I don’t think my aunt ever thought her house would be worth more than $300,000 because our values were so squashed here. The values never climbed in the way they did in Cheviot Hills or the Hollywood Hills.”

Lumpkin paused, reflecting on the house next door that recently sold for more $1 million.

“She should have been able to enjoy the fruits of her labor.”

Column: Who is buying those expensive houses in South L.A.? Is it really just white people?