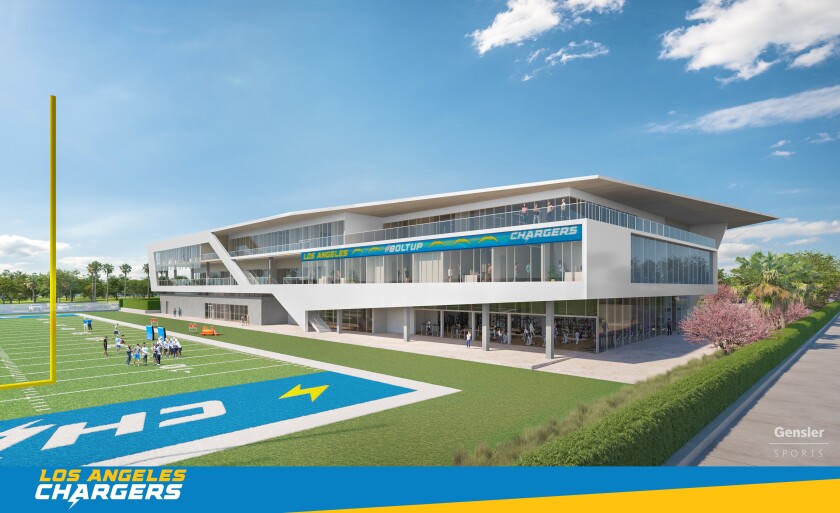 The Chargers are prepared to take the next step in their move to Los Angeles with an agreement to construct their headquarters and training facility in El Segundo.

When relocating from San Diego in 2017, team officials decided to temporarily shift their operation to Costa Mesa while initiating a search for a permanent home.

The new facility will stand near the intersection of El Segundo Boulevard and Nash Street on a 14-acre site that was part of a sprawling campus operated by defense contractor Raytheon Technologies Corp.

The project, set to go before the city’s planning commission later this month, is expected to be completed in spring 2024.

“It really is a statement about where we want to be and who we are at our core,” said Fred Maas, the Chargers’ chief of staff. “I think it’s going to be an important expression of the Los Angeles Chargers that we all know and envision.

In the interim, the Chargers will continue to train in Orange County. Their new headquarters will sit seven miles from their game-day home, SoFi Stadium, which the Chargers share with the Rams.

Continental will build the complex, valued at more than $100 million, to the Chargers’ specifications and rent it to the team under a long-term lease, Continental President Richard Lundquist said.

The three-story complex will serve multiple functions, but the key focus will be on pampering the players when possible and easing football’s toll on their bodies, architect Ron Turner said.

“The first floor is almost like a medical center,” he said, with doctors’ offices, physical and mental therapists, weight training, hydrotherapy, chirotherapy and “all the sophisticated performance tools that they have to get these players healthy again and rehabbed as soon as possible.” 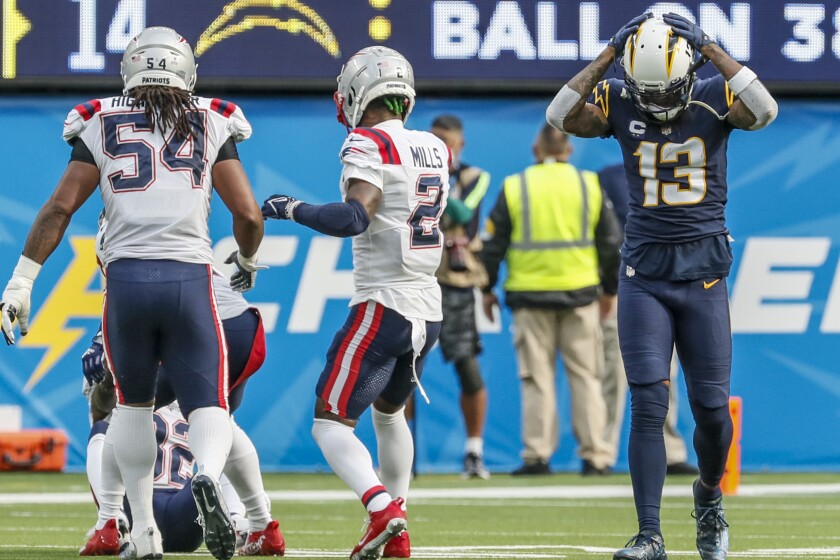 The Chargers had their second consecutive poor performance on offense and their second loss in a row, this one to the New England Patriots, 27-24.

Turner is the leader of sports facility design at architecture firm Gensler, which also produced the Star, the celebrated headquarters and practice facility of the Dallas Cowboys.

The Chargers’ 145,000-square-foot home will be constructed in a shape that reflects SoFi Stadium’s appearance and also evokes the team’s lightning bolt logo.

The team’s search for a workable location took more than four years mostly because of the land required. The facility will include three natural-grass fields that take up six acres.

Maas said he looked at more than 35 sites himself, from south Orange County to Ventura County. He called finding the El Segundo space “a miracle.” 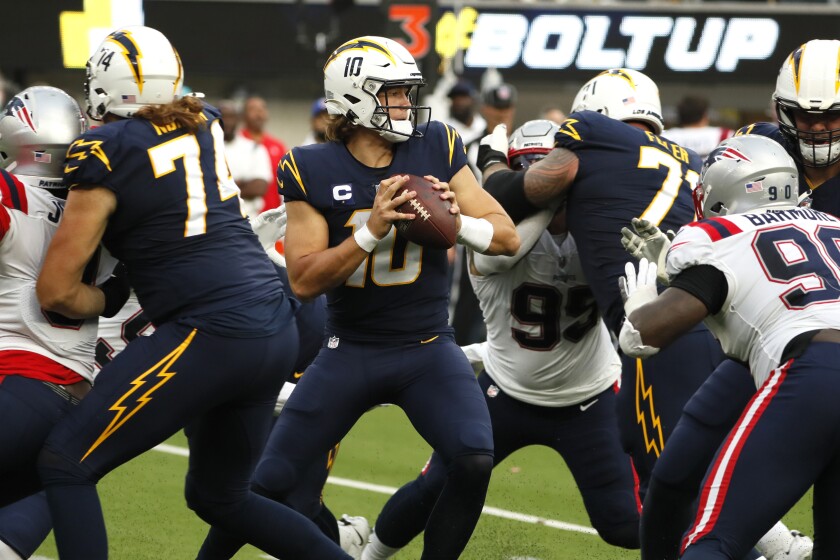 Elliott: Have teams figured out Justin Herbert? Why Chargers’ loss to Patriots is concerning

Justin Herbert still has a lot to figure out when it comes to mastering defenses, but are the Chargers’ issues self-sabotage or a bigger problem?

“If waiting for perfection gets you perfection,” Maas said, “it’s worth the wait.”

Along with their day-to-day operations, the Chargers also intend to conduct training camp at the facility. The field area is designed to accommodate bleacher seating for more than 5,000 spectators. There will be 348 on-site parking spaces, plus off-site parking.

The headquarters will include up to 90 player lockers, each 42 inches wide with ventilation blowing air up and out of the building. Each locker will include a portable video screen that can receive feeds from the three practice fields and other data sent by coaches.

The strength and conditioning areas will include garage doors that can be opened for increased ventilation.

“We’ve had to upgrade all the air-filtration systems,” Maas said. “We had to be sort of future-pandemic-ready.”

There will be an outdoor lap pool and a lounge. Video games will be at the ready as part of an esports studio that eventually could host an esports team.

The complex will have broadcasting facilities and a 180-seat auditorium for player meetings and other events. There will be a news conference room and a cafeteria. On the top floor will be an indoor-outdoor hospitality club for VIP events.

El Segundo was formerly known as an aerospace hub in the shadow of Los Angeles International Airport and a refinery town — its name derives from the 1911 selection of the spot by Standard Oil Co. of California for the company’s second oil refinery.

But, for more than a decade, the city has been attracting a variety of high-profile businesses that might once have passed over the humble burg of 17,000 residents. 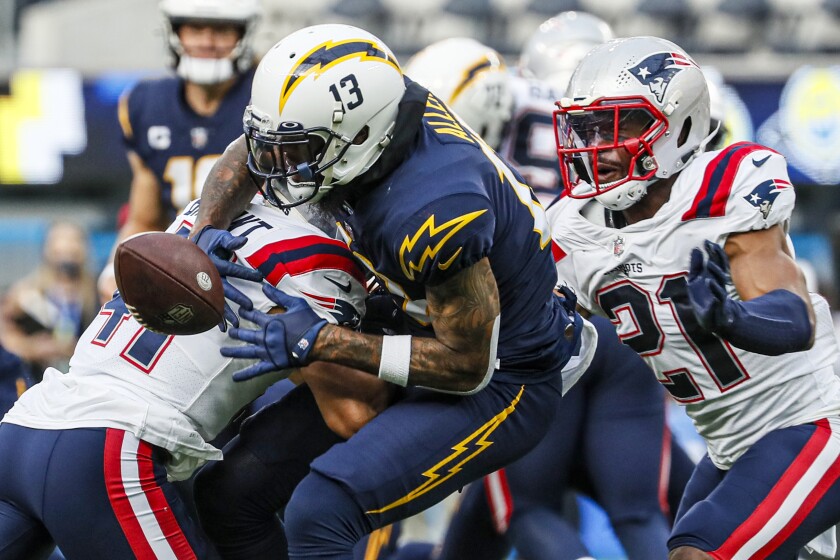 Less than a year after losing to the Patriots in the worst loss in franchise history, Justin Herbert and the Chargers lost to New England again on Sunday.

New York cosmetics giant L’Oreal will open a second headquarters in El Segundo next year near the new headquarters of plant-based meat maker Beyond Meat Inc. in a former airplane manufacturing plant.

The Los Angeles Times moved to El Segundo in 2018. Hyundai Motor America bought an office building there earlier this year.

The Chargers will become the third professional sports team to be headquartered in El Segundo, joining the Lakers and Kings.

“We are the Los Angeles Chargers,” Maas said. “We’ve got to be there and be part of the fabric of the community. We couldn’t think of a better statement of that than being in the city of El Segundo.”