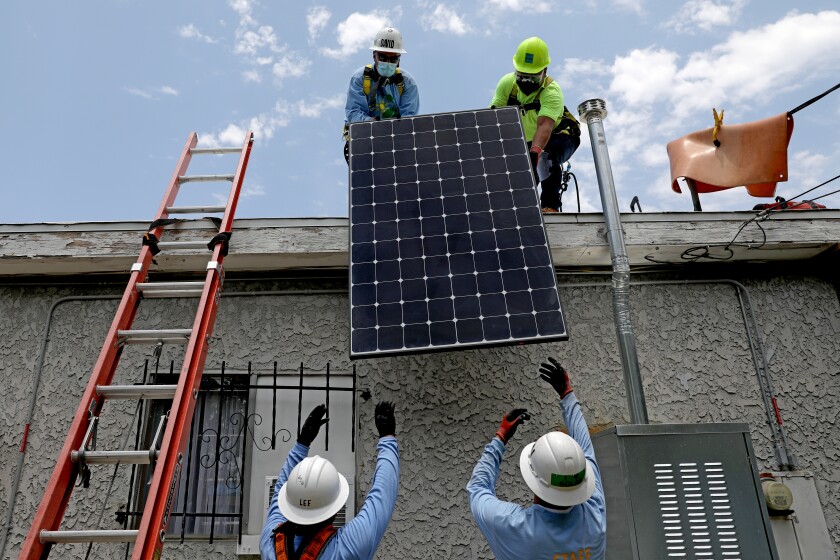 California officials want to slash payments for rooftop solar power while adding incentives for homes and businesses to install batteries, saying the changes will help the state achieve 100% clean energy in a way that keeps the lights on, prevents electricity rates from spiraling out of control and also encourages people to drive electric cars.

The proposal from Martha Guzman Aceves, one of five members of the California Public Utilities Commission, would revamp an incentive program called net energy metering that has helped the state become a national solar power leader, with more than 1.3 million rooftop and other small-scale systems installed. The solar industry and climate change advocacy groups have lobbied Gov. Gavin Newsom and his appointees on the utilities commission to keep the program’s basic tenets unchanged.

Toward a more sustainable California

Get Boiling Point, our newsletter exploring climate change, energy and the environment, and become part of the conversation — and the solution.

But in an interview, Guzman Aceves said net metering needs to evolve to reflect California’s changing energy needs. The Golden State’s power grid is increasingly flooded by solar energy during the afternoon but strained on hot summer evenings, when millions of people throttle up their air conditioners to cope with high temperatures made worse by the climate crisis.

Reducing demand for planet-warming fossil fuels such as diesel and natural gas during that “net peak” period in the evening, Guzman Aceves said, is her overriding goal. She and her staff crafted a plan to phase out net metering that will strongly encourage new and existing solar customers to add battery storage systems that can bank clean energy for after dark, she said.

“There’s a huge opportunity here for us to get more out of these customers to contribute to the net peak,” she said.

Other elements of the commissioner’s proposal would prompt Californians to transition to electric vehicles and switch from natural gas furnaces and stoves to electric appliances that can be fueled by solar and wind energy — key components of California’s war on climate change. For instance, homes and businesses that add solar panels would be allowed to build much bigger systems than is currently allowed under net metering, to support lifestyles that are increasingly powered by electricity.

“I think the proposal is strong,” Guzman Aceves said. “It’s focused on what we collectively need, to get off of fossil fuels.”

Solar executives, though, were furious Monday as they began to review the proposal.

Walker Wright, vice president of public policy at San Francisco-based Sunrun, the nation’s largest rooftop solar installer, said in a written statement that Guzman Aceves’ decision would “impose the highest discriminatory charges on solar and energy storage customers in the U.S., putting rooftop solar and batteries out of reach for countless families in California just as more households are demanding that the state do more to combat climate change and provide them with reliable, sustainable energy.”

Wright also said the proposed changes are “contrary to the state’s objectives of addressing climate change and eliminating frequent blackouts” — a reference to the utility industry’s practice of shutting down the electric grid in certain places during dry, windy conditions to prevent wildfire ignitions. Solar supporters see those “public safety power shutoffs” as a powerful argument for encouraging rooftop systems paired with batteries that can serve as a backup power source when the grid goes down.

The national Solar Energy Industries Assn. was similarly displeased, saying the proposal “will create the highest solar tax in the country and tarnish the state’s clean energy legacy.” Higher fees would do the opposite of what Guzman Aceves intends, the trade group said, discouraging families not only from installing solar panels but also from putting batteries in their garages.

“Only the wealthiest Californians will be able to afford rooftop solar, shutting out schools, small businesses, and the average family from our clean energy future,” said Abigail Ross Hopper, the trade group’s president, in a written statement. “The only winners today are the utilities, which will make more profits at the expense of their ratepayers.”

The utilities estimate that “cost shift” at $3.4 billion annually, a figure hotly disputed by the solar industry and climate activists, who say rooftop panels create many public benefits that aren’t included in the calculation, including the health benefits of less air pollution from fossil fuels and the cost savings from limiting the need for new power plants and transmission lines.

Clean energy activists and utility giants are duking it out over the future of rooftop solar.

Two influential consumer watchdog groups, the Utility Reform Network and the state’s Public Advocates Office, have joined the utilities in arguing for reduced incentives for rooftop solar. A handful of prominent environmental groups, including the Natural Resources Defense Council and the California Environmental Justice Alliance, have also called the program inequitable.

Guzman Aceves described the $3-billion cost shift estimate as “on the low side” of what California spends on net metering. If the state were to instead use that money to build large solar farms in the desert or on retired farmland — which produce electricity more cheaply than rooftop systems because of economies of scale — it could triple its current solar capacity, a comparison that helps to illustrate “how much we’re spending and how much we’re getting” from the program, Guzman Aceves said.

To get more out of net metering, the commissioner wants to make several seismic changes to the program.

First, she would slash the payments that newly enrolled solar customers receive for the electricity they send to the power grid when their systems generate more energy than they need. Instead of being compensated at the retail rate — the same rate they pay their utility for electricity from the grid — they would be paid at a much lower rate known as the “avoided cost.”

Second, new solar customers would pay a monthly “grid participation charge” of $8 per kilowatt of solar power per month to help cover the costs of maintaining the grid, such as utility safety projects to reduce the risk of wildfires ignitions. Net metering critics say that type of “fixed charge” can ensure that crucial utility expenditures aren’t just paid for by lower-income households.

A home with an five-kilowatt solar system would be charged $40 per month, or $480 per year.

The proposed decision responds to concerns raised by solar companies — namely, that reducing net metering payment and adding monthly fees would crash the solar market — by creating a “market transition credit” of up to $5.25 per kilowatt per month for homes that add solar panels within four years of the new program taking effect. The size of the available credit would drop each of those four years, but customers who add solar — with or without batteries — would lock in the savings for a decade.

Guzman Aceves said the credits are designed to result in a “payback period” of 10 years for new solar customers, meaning that’s how long it would take them to make back their upfront investment in clean energy through lower electric bills.

Payback periods currently hover around five years. The utilities had proposed net metering changes that could increase them to roughly 20 years, far more than the seven years or so that solar companies say is needed to persuade people to invest.

“I personally know that for some of my expenses, I recently put in a water heater, and that has a 10-year payback,” she said. 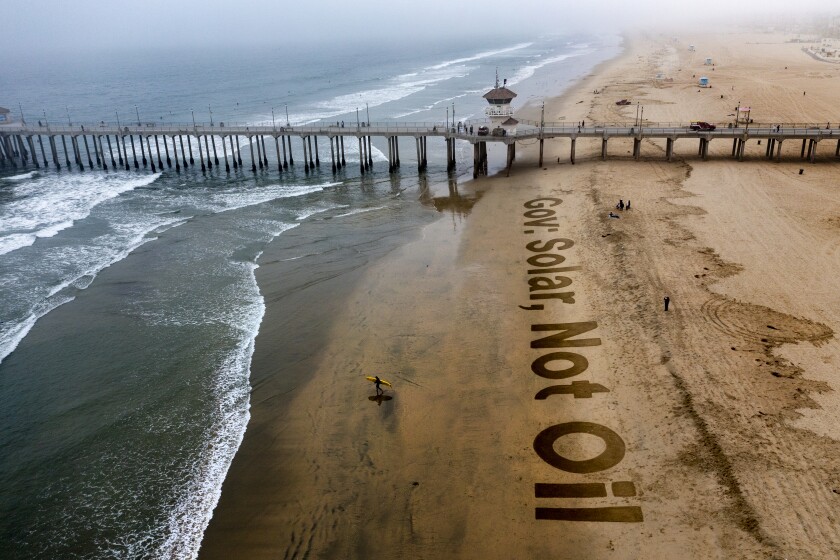 Why are unions clashing with the solar industry over clean energy batteries?

Homes and businesses that already have solar would be switched from net metering to the new “net billing” program envisioned by Guzman Aceves 15 years after their systems were installed. She suggested that should give those solar customers — who data show are wealthier and whiter than the state as a whole — more than enough time to make back their investments.

The commissioner’s proposal also aims to make solar panels and batteries more accessible to all Californians. Low-income homes would be exempted from the monthly grid participation charges. And a $600 million “equity fund” would help bring clean energy to heavily polluted neighborhoods, possibly through incentives for batteries, or for locally built “community solar” facilities.

“There was a lot of agreement on the need to invest in low-income communities and tribal,” Guzman Aceves said.

The proposed decision would only affect customers of Edison, PG&E and Sempra subsidiary San Diego & Electric. Customers of publicly owned utilities such as the Los Angeles Department of Water and Power wouldn’t see their solar incentives change.

The earliest the Public Utilities Commission could vote on the proposal would be Jan. 27, after a public comment period.

Your support helps us deliver the news that matters most. Subscribe to the Los Angeles Times.

By then the agency will have a new president, with Marybel Batjer stepping down and being replaced by Gov. Newsom’s energy advisor, Alice Reynolds, on Dec, 31. Guzman Aceves will also be leaving the commission at the end of this week, after being appointed by President Joe Biden to lead the southwestern region of the U.S. Environmental Protection Agency.

Especially if Newsom moves quickly to replace Guzman Aceves, he could have a lot of sway over the final decision — if he wants to. The governor’s office didn’t immediately respond to a request for comment about his position on net metering.

Solar companies and climate advocacy groups will continue to lobby the governor to push the commission in their direction.

The Save California Solar campaign, which includes more than 600 organizations, says it delivered 120,000 public comments supportive of net metering to Newsom last week. The campaign estimated Monday that even after the “market transition” credits proposed by Guzman Aceves, the commissioner’s plan would add $57 per month to the bill paid by the average solar home.

“It is a story as old as this country: a new technology is developed, programs and policies are offered to help consumers to adopt the technology and bring down the costs over time, and just when people in Black and brown communities are beginning to be able to afford the technology and benefit from it — the programs and policies are often taken away,” said William Smart Jr., CEO of the Southern Christian Leadership Conference, in a written statement released by the Save California Solar campaign.

Experts Predict What The Housing Market Will Look Like In 2022

Mexican Party Foods at Christmas and Other Holidays