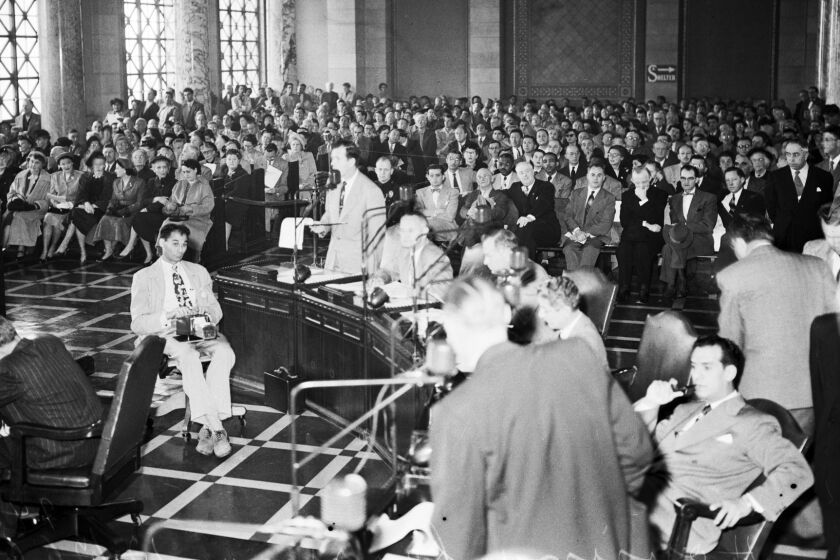 In the scramble to appease centrists by scaling back their massive social safety-net spending bill, Democrats are discussing cutting in half new funds to address homelessness, public housing, racial inequities in homeownership and renters’ assistance.

But because of the stark differences in the way low-income housing is addressed state by state, the proposed cuts have set off a West Coast-East Coast tug of war over what is expected to be a much smaller $150-billion pie.

The public housing aid would primarily benefit New York and other mostly East Coast and Midwest cities that have large stocks of such housing.

Low-income renters in New York City and similar cities would also be eligible for vouchers to subsidize their housing payments, which would probably be distributed to cities and counties based on need.

A dark side to the California dream: How the state Constitution makes affordable housing hard to build

In 1950, Californians voted to put a provision in the state Constitution that makes it harder for poor people to find a place to live.

Leaders on the West Coast complain that it creates a double-dip effect, in which certain cities would benefit from both provisions.

Los Angeles Mayor Eric Garcetti and other California mayors pushed the White House in a virtual meeting last week to ensure that cuts would not be made equally between dollars for rental vouchers and money to repair public housing.

“It unintentionally discriminates in favor of East Coast” cities, Garcetti said in an interview. “So if you’re in New York, you get the bulk of [public housing funding], and an equal share of [vouchers],” Garcetti said. He asked the White House to “protect those vouchers disproportionately, so you can be fair to America.”

“There’s no universe in which the New York delegation can return to New York City without funding for public housing,” said Rep. Ritchie Torres, a Democrat who grew up in New York public housing. “Affordable housing is the foundation for everything else.”

While California does not have nearly as much public housing, it faces a deep shortage of affordable homes and a rental market that’s squeezing lower- and middle-class Californians.

“There is no more compelling challenge in my city, and most every city in California, than affordable housing and homelessness,” said Sacramento Mayor Darrell Steinberg, who joined Garcetti on the White House call.

California-based housing advocates are concerned about maintaining the bill’s support for both low-income renters, through vouchers, as well as incentives for homebuilders to develop more supply to reduce costs for all residents.

“Just giving someone a voucher is not enough. It doesn’t guarantee access to an affordable home, especially when you try to take it to scale,” said Matt Schwartz, president of the California Housing Partnership, which estimates the state needs 1.2 million more affordable homes by 2030. Providing more vouchers without increasing supply would result in a “total traffic jam, and it ends up driving up prices.” 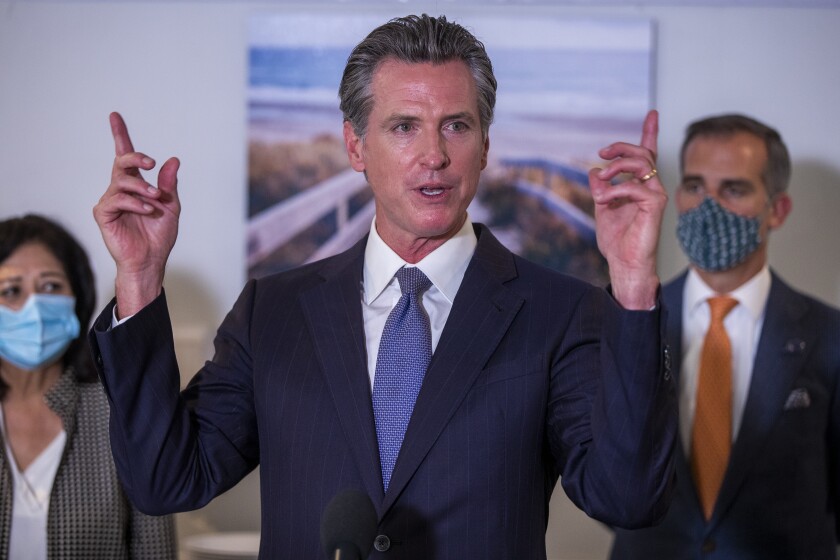 Gov. Gavin Newsom is emphasizing holding cities accountable for state laws on zoning and approving housing projects, including starting a new effort staffed with more than dozen employees to enforce the rules.

California housing advocates have also turned to House Speaker Nancy Pelosi (D-San Francisco), in hopes she would push solutions to the state’s housing crisis. A Pelosi aide declined to comment on specifics, but said “the speaker has consistently pushed for the highest possible number for housing priorities.”

California also stands to benefit from a proposal by Rep. Maxine Waters (D-Los Angeles) to restore a defunct contracting program. The plan would allow private landlords to contract directly with federal or state governments on direct rental assistance.

The program, which was ended in 1984, would encourage production of new homes, because it would allow homebuilders to go to a bank and more easily get financing for new construction. The House’s original plan funded the program at $15 billion.

There are some ways in which California and New York interests are aligned. Torres and more than 120 other House Democrats — including many from New York and California — urged Pelosi and Schumer to preserve all of the funding for public housing, rental assistance and new home construction.

In addition, the heads of several large housing agencies in both states, including Lourdes Castro Ramírez, secretary of California’s Business, Consumer Services and Housing Agency, recently made a joint request to congressional leaders to preserve the voucher programs and make a modification to how affordable housing is financed.

“We have an opportunity with this Build Back Better Plan to be able to make long-lasting changes to the housing affordability market,” she told The Times. “This is why I think it’s so important for all of these housing investments to be part of this plan.”

But the housing financing program, written by the House Ways and Means Committee, appears likely to be cut from the bill, according to sources familiar with the negotiations. 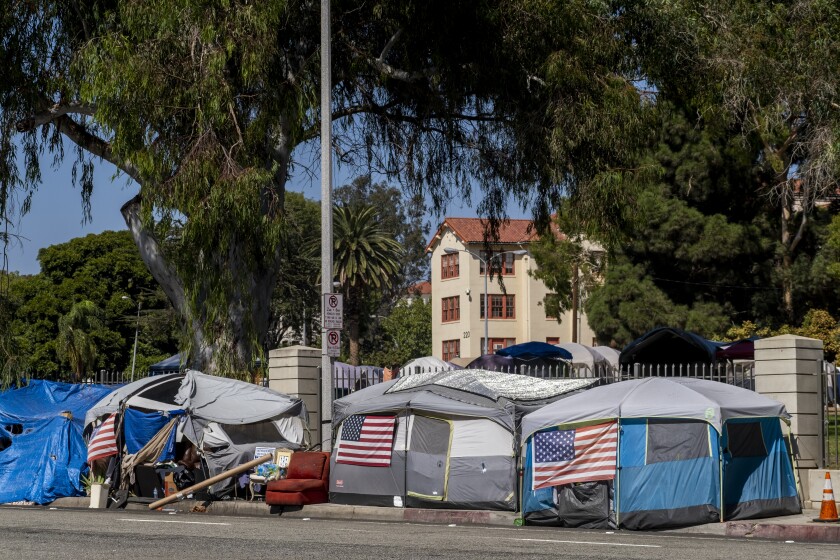 VA says it will house homeless veterans who are camped around its West L.A. campus

The Democrats’ social spending and climate bill was originally pegged at $3.5 trillion. But because of concerns from centrist Democratic Sens. Joseph Manchin III of West Virginia and Kyrsten Sinema of Arizona, it is expected to end up around $1.75 trillion. That much cutting had prompted a flurry of lobbying from each policy sector trying to preserve what Democrats view as a once-in-a-generation effort to make progress on their priorities.

Advocates on Capitol Hill and elsewhere argue that provisions such as childcare and early education are important, but don’t matter much to the child who is sleeping in a car.

The White House was “looking at dropping entire planks from the Build Back Better Act — housing being one of them,” said one person familiar with the effort. Outcry from lawmakers got some of the funding restored and since then, the White House has favored repairs to public housing and some provisions to build more supply, but has shown less interest in funding rental vouchers or assistance, the person said.

The $327 billion originally proposed for housing aid “could end homelessness, preserve public housing and put the country on the path to universal rental assistance,” said Diane Yentel, president and chief executive of the National Low Income Housing Coalition. “It is deeply painful to even consider having Congress and the White House squander that opportunity.”

The latest funding level — $150 billion — could still be powerful, Yentel said, if it is focused on people with the lowest incomes.

As part of the discussions, federal lawmakers are also considering payments for first-time, first-generation homebuyers, in an attempt to repair long-held racial inequity that prevented people of color from owning homes. Proposals on the table would provide either a tax credit or direct payment to buyers.

Some housing advocates worry that a tax credit, which the consumer wouldn’t get until their next tax bill, would only help those who can already afford to buy a home and would further drive up prices.

“We have never figured out how to put that money on the closing table,” said David Dworkin, president and chief executive of the National Housing Conference.

Ben Simmons is selling his mansion outside Philadelphia for $5 million