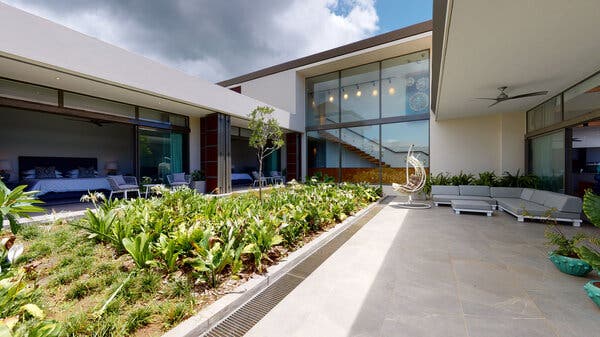 The Republic of Mauritius has seen demand plummet in the absence of tourists, but with many homeowners willing to wait, prices are stable.

A Modern Five-Bedroom Villa on Mauritius

This modern five-bedroom villa overlooks the southwestern coast of Mauritius, the island nation in the Indian Ocean about 1,200 miles off the coast of Africa.

The property, on 0.4 acres near the village of Bel Ombre, sits just outside the Heritage Natural Reserve in Mauritius’s Savanne District, and is part of Heritage Resorts, which includes a luxury residential community and two five-star hotels.

The 7,276-square-foot house, built in 2019 and being sold fully furnished, has sleek lines, expansive views and is designed to enhance the flow of indoor and outdoor living through its atrium, decks and terraces.

Timo Geldenhuys, a partner of Mauritius Sotheby’s International Realty, which has the listing, said the house is “perched high above the development, with 180-degree sea and golf course views,” and called it “the jewel in the crown on this world-class, five-star estate.”

Because it sits on a slope, the two-story villa is oriented around the ground floor, though the entrance and guest suite are upstairs. The guest suite has a king bed, en suite bathroom and a sunken lounge area that opens to a private terrace and rooftop garden with panoramic views. From the foyer, a floating timber staircase with a glass balustrade leads down to the living areas, including the large open kitchen, dining and living room, with double-height ceilings adorned with wooden inlays. Doors on one side open to a large atrium. On the other side, through the living area, is a broad terrace facing the pool and garden with dining tables, lounge seating and a gas barbecue.

The kitchen, near the landing, has marble counters, two islands and appliances concealed behind anthracite gray doors. Adjoining the kitchen is a spacious utility area with storage, a washing machine, and a sitting room and bathroom for a housekeeper. From the landing, a hallway leads to three bedrooms with en suite baths, and a study and TV lounge are tucked nearby. Beyond this, circling back to the living room, is the main bedroom suite, with a raised sun deck, a walk-in closet and a bathroom with an indoor/outdoor shower.

“It’s the biggest outdoor shower you’ve ever seen in your life,” Mr. Geldenhuys said. “It’s like a whole garden to get to the actual showerhead.”

The property has air-conditioning throughout, and solar water heaters. The pool is not heated, nor does it need to be, given the tropical climate, Mr. Geldenhuys said. The property also includes access to a golf course, five-star hotels and spa facilities, a beach club, restaurants and gardens. Bel Ombre is home to several resorts, as well as the World of Seashells museum. Sir Seewoosagur Ramgoolam International Airport is about 25 miles east.

The Republic of Mauritius, with about 1.25 million residents, is a haven for golfing, kitesurfing, beach vacations and favorable tax laws.

Data from Mauritius’s online property search portal, LexpressProperty, reveals that the housing market contracted in 2020, with supply and demand — in the form of advertisements and inquiries — both dropping, especially inquiries.

Mr. Geldenhuys confirmed that the market currently favors buyers. “We have an oversupply in the market right now, but we anticipate that as borders open this will change,” he said. Sales volumes “definitely have not recovered,” and new lockdowns and travel bans across the globe are likely to continue impacting the local market, which relies heavily on tourists.

Despite this, prices have held firm. The Mauritian government does not publish up-to-date real estate sales statistics — its most recent published figures are from 2019. But agents said prices have remained where they were before the pandemic. “It has not really fluctuated due to Covid,” Mr. Geldenhuys said, noting that sale prices range from $2,500 to $6,000 a square meter ($232 to $557 a square foot), including the cost of land.

If homeowners are “willing and wanting to sell, they would just hold the property until the market recovers,” he said. “They’re not desperate sellers, so they’re not going to drop their prices.”

Sales volumes dipped “heavily” in 2020, she said, but Mauritius “recovered very nicely since October 2021, when the island was again opened to outsiders who could arrive without having to do a quarantine.”

Between its declaration of independence from Britain in 1968 and 2005, the country’s residential real estate market was closed to buyers who were not Mauritian citizens. When the market opened to all, “the first projects were sold very fast and the demand for more was big,” Ms. de Falbaire said. “As a result, many landowners converted their land into real estate projects and the reverse happened: We now have more stock than buyers.”

However, she added, “those projects that are well-placed, and of high end, do always sell well.” In particular demand: renowned golf courses, where new properties often sell out as soon as they’re offered.

Last year, the government lowered the minimum purchase threshold for Mauritius’s residency by investment program from $500,000 to $375,000, though it’s too soon for the change to impact the market, Mr. Geldenhuys said, because many developments are still in the pipeline.

But Ms. de Falbaire said she is selling properties at that price level to buyers motivated by residency. One developer “just launched a new phase of 22 units in that price bracket, and it was sold out within a few days,” she said. She also mentioned a client from South Africa who bought a property this month and who “definitely wanted a residence permit for Mauritians. That was one of their criteria.”

Because tourism is normally a large driver of foreign investment, the pause in tourism caused real estate to surge proportionally, even as overall investment dropped, Mr. Geldenhuys said.

Who Buys on Mauritius

Mauritius has no property taxes, inheritance taxes, taxes on dividends, or capital-gains taxes, and imposes a maximum tax on rental revenue of 15 percent. “All our buyers obviously also wish to enjoy the benefits from our gentle tax regime,” Ms. de Falbaire said.

She said half of Mauritius’s buyers come from France — often retired couples buying a “second, third or fourth residence” looking for a winter refuge and golf courses. (The island was under French rule between 1715 and 1810.) The rest come from South Africa — around 30 percent of the market, and growing — with smaller cohorts from Britain, Belgium, Germany, Switzerland and Austria.

Closing costs paid by the buyer, including transfer taxes, notary fees and the agent’s commission, add up to around 8 percent of the purchase price, Mr. Geldenhuys said.

Ms. de Falbaire added that when buying off-plan, there are no agency fees. Otherwise, the 4 percent commission is split between buyer and seller.

Transactions are done in Mauritian rupees, U.S. dollars or euros, she added.

There is no property tax in Mauritius. At Heritage Resorts, a monthly charge of around $1,350 covers access to amenities and services including the beach club, two hotels, maintenance of the estate and care for the garden and pool.

“The only extra is personal water and electricity consumption,” Mr. Geldenhuys said.