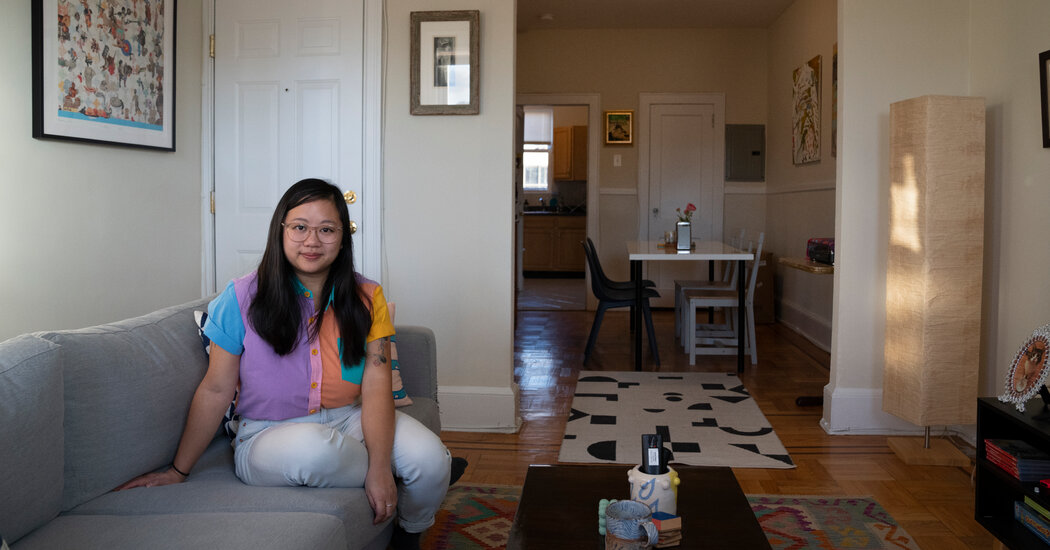 After living in Madison for six years, they were ready for a change. But they never dreamed they would find a place so close to New York City.

When Florence Chan left New Jersey for Wisconsin in 2015, she never imagined she would move back to her home state.

Ms. Chan, 28, a UX designer, grew up in Milltown, a borough outside the city of New Brunswick, and attended college just down the road, at Rutgers University. Like many others who grew up in small towns — Milltown is just a square mile, with a population of 7,000 — she was ready to get out, to go somewhere new.

As a child, Ms. Chan regularly visited Manhattan with her family, and “always wanted to live in a bigger, busier city,” she said. “Growing up in New Jersey, I didn’t particularly enjoy the state itself. Even as an adult, I was like, ‘I’m never moving back to Jersey.’”

But last August, she and her fiancé, Paul Smirl, who grew up in Wisconsin, moved into an apartment in Hoboken, N.J., 45 minutes from her parents’ house and just across the river from New York City. This unexpected move was facilitated by a series of happy coincidences.

Ms. Chan and Mr. Smirl spent six years in Madison, Wis., where she worked as a software tester for a tech company and he was a marketing content writer for the University of Wisconsin-Madison’s business school. But Madison began to feel small, and they wanted to find a place with more things to do, more restaurants to try and a little more anonymity. They considered Chicago, where Mr. Smirl had spent some time while in college, and Philadelphia, which was close to Ms. Chan’s family in New Jersey. New York City eventually joined the list, too.

Ms. Chan was hoping that a move would coincide with a career shift. She eventually took classes to become a UX designer — a role that helps determine how a website or product functions and feels to those using it — and recently began a job doing that for the wedding registry site Zola.

During the second half of 2020, Ms. Chan regularly browsed online real estate listings in all three cities, and quickly learned that they could get more space for their money in Chicago and Philadelphia.

But then they visited Ms. Chan’s family in New Jersey for the holidays last winter, and she cried on the long drive back to Wisconsin. She missed her family more than she had realized. Philadelphia and Chicago were soon cut from the list, and Ms. Chan and Mr. Smirl decided to focus on New York.

The couple began searching real estate listings in New York City. They were looking for something that was about the same price as the three-bedroom home they shared in Madison for $1,800 a month.

They knew they’d have much less space in New York, but they hoped to find a one-bedroom in their price range. At first, looking across the Hudson River didn’t occur to them. “I assumed that Jersey was out of my budget,” Ms. Chan said. So she kept her eyes — and her search parameters — set on Brooklyn and Queens.

Last spring, on another trip home to New Jersey, Ms. Chan was hanging out with Kat Schneider, her best friend from high school. Ms. Schneider and her husband were about to move into an apartment in a Hoboken building owned by her husband’s aunt. Another apartment, directly above theirs, had just opened up.

Ms. Chan and Mr. Smirl were interested, and they were impressed by the amount of space they could get for what they had been paying in Madison. The apartment above Ms. Schneider’s, a flexible two-bedroom, was $1,800 a month. Instead of squeezing into a small Brooklyn apartment, they could have a dining room and an office — they are both still working from home — in addition to a kitchen, living room and bedroom.

It was a steal, and they knew it.

Occupations: Ms. Chan is a UX designer; Mr. Smirl is a content writer.

Added bonus: They are happy to have enough space to work comfortably at home.

A walking tour of Hoboken: “Around the corner from us is Dom’s Bakery, which has been around for a really long time and sells the best focaccia,” Ms. Chan said. “We get our coffee from The Little Local, which sells fresh beans and always smells amazing. And then there’s the farmers’ market in Church Square once a week — the four of us all go together.”

Ms. Chan laughs, now, describing the kismet of finding a place in the building where her best friend from high school lives. As teenagers, she said, “We would say, ‘Oh, it would be so cool if we all lived in the city someday!’”

She and Ms. Schneider attended high school and college together, but as Ms. Schneider commuted to Rutgers, there was never an opportunity to be roommates. Now when they explain their living situation to acquaintances, there’s a common response: People compare it to the TV show “Friends.” Indeed, there’s plenty of dropping by on weeknights to say hello or share a meal.

And Hoboken has proved an ideal home for Ms. Chan and Mr. Smirl. “It’s close to the city, but it has a quieter feeling, more akin to being in a town,” Ms. Chan said.

The pace of life is slower than that of Manhattan, she said, and the neighborhood is full of young families and people walking their dogs. She and Mr. Smirl have enjoyed exploring their new neighborhood on foot, especially on the Hudson River Waterfront Walkway, a green space that follows the river for more than 18 miles.

And her parents are thrilled; they visit nearly every weekend. Sometimes the whole family will venture into the city together to have lunch or to roam Chelsea’s art galleries. Or they’ll visit Ms. Chan’s extended family in Queens.

Ms. Chan can now see New Jersey for what it is: an excellent place to call home, and a stone’s throw from the familiar and the new.

Know a renter with an interesting story? Email: renters@nytimes.com.

Modern Villa For $17.8 Million Hugs The Sea On The Spanish Island Of Mallorca

From Mobile Phones To Mayfair Penthouses, One Of Britain’s Wealthiest Makes A Foray Into Residential Real Estate