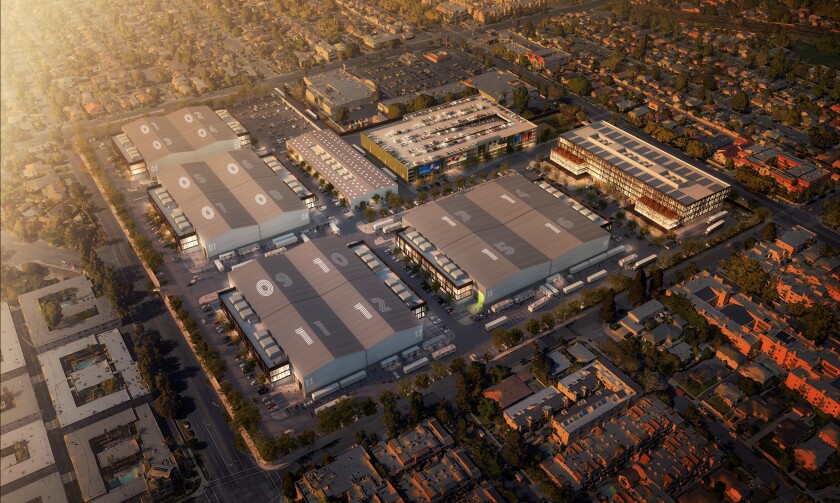 Warner Bros. is selling its satellite 32-acre lot as part of a previously announced deal but will lease it back from the new owners in 2025 after a more than $500-million makeover that will transform the lot in what will be one of the largest new studio developments in the country when it gets underway next year.

The lot’s existing facilities, including five soundstages, offices and sets, will be replaced. The studio will be remade with 926,000 square feet of new construction, including 16 soundstages with connected production support space, a 320,000-square-foot office complex, a commissary, a parking garage and a dedicated set- and prop-building space (known as a mill in industry jargon).

Warner Bros. will occupy the Ranch Lot, as it will be known, as the sole tenant. In a demonstration of the demand for such production facilities, a competing entertainment studio also sought to lease the entire lot, said Worthe, president of Worthe Real Estate Group.

The price of the lease was not disclosed, but an industry expert familiar with the transaction but not authorized to talk about it valued it at more than $1 billion.

The Ranch has rich Hollywood history dating to the 1930s, when it became a rural backlot for Columbia Pictures Corp. and was soon home to massive sets for director Frank Capra’s 1937 adventure fantasy “Lost Horizon” and director Howard Hawks’ drama “Only Angels Have Wings,” starring Cary Grant.

In more recent decades it was used for filming the movie “Lethal Weapon” and the TV series “Bewitched” and “I Dream of Jeannie.”

Opening credits of Warner Bros.’ 1990s sitcom “Friends” feature the young cast members frolicking in a fountain near the center of the lot. The fountain has been moved to Warner Bros.’ main lot a mile away in Burbank, where it is a highlight of tours. 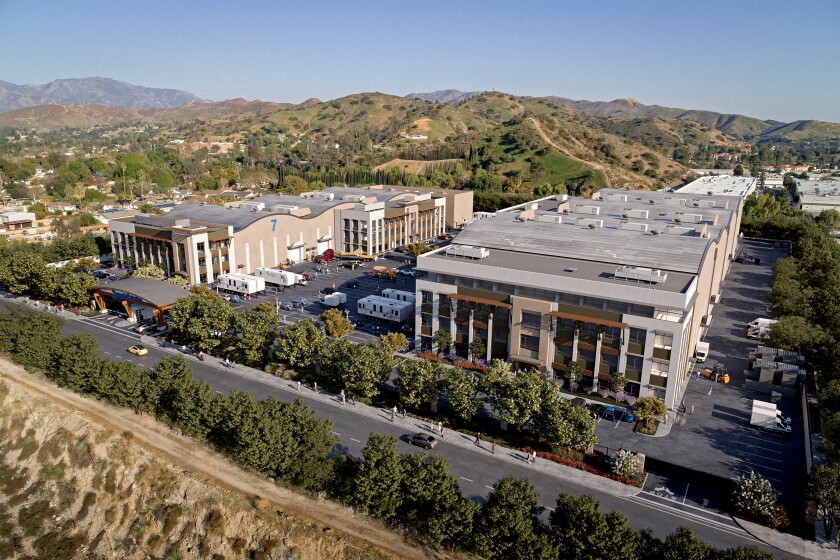 Streaming has made movie studios a hot ticket. A new one is planned for the San Fernando Valley

The surge in video-on-demand streaming has provoked “an insatiable appetite” for media-oriented real estate such as studios and offices.

Recent shows shot at Warner Bros. Ranch include the crime drama “Animal Kingdom” airing on TNT and sitcom “Young Sheldon” airing on CBS. Both are produced by Warner Bros. Television.

“Continuing to enhance our state-of-the-art studios and full-service offerings for our productions and partners is a key priority for our company,” said Jeff Nagler, president of Warner Bros. worldwide studio operations. “The new Ranch Lot development will certainly fulfill this goal in the Los Angeles area.”

Soundstages are one of the hottest categories in commercial real estate as entertainment production keeps rising. The surge in video-on-demand streaming provoked “an insatiable appetite” for media-oriented real estate such as studios and offices, according to real estate brokerage CBRE.

The Los Angeles area already ranks as the world’s leader in soundstage capacity with more than 5.2 million square feet of certified space, FilmLA data show. Local soundstages have remained leased during the pandemic; location shoots, which had dwindled to a trickle during the worst months of the pandemic, are mounting a comeback. 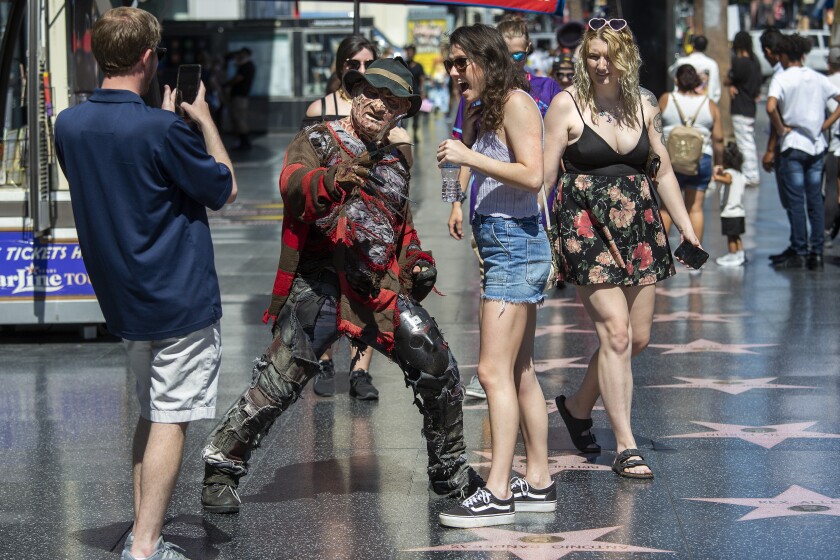 Hollywood is known for comebacks. Now the neighborhood is working on its own

Theater, tourism, dining out, shopping took big COVID hits. But the community, which defines Los Angeles in many out-of-towners’ minds, is looking up.

Through a deal first announced in April 2019, Worthe and Stockbridge will acquire the Ranch Lot in 2023. In the complex agreement, valued at more than $1 billion, Warner Bros. acquired from Worthe the legendary Burbank Studios, the former headquarters of NBC Entertainment and the TV home to such talk show giants as Johnny Carson and Jay Leno.

Worthe and Stockbridge retained ownership of a slice of Burbank Studios, where they are building two office buildings designed by architect Frank Gehry. Warner Bros. will become the sole long-term tenant of the 800,000-square-foot office complex known as the Second Century campus.

When the 16 stages at the Ranch Lot are completed, Warner will have control of 56 soundstages, including 32 stages at the main lot and eight at Burbank Studios.

With billions of dollars’ worth of annual production on the line in an increasingly competitive industry, the people who make movies and television shows want every advantage they can get, Worthe said.

“It’s not just that they are putting out more content, they are putting out better content because that’s what’s getting people to subscribe,” he said. “There is a lot of competition for our eyeballs and our wallets. The quality of what’s being produced is high, and they are demanding better and better facilities.” 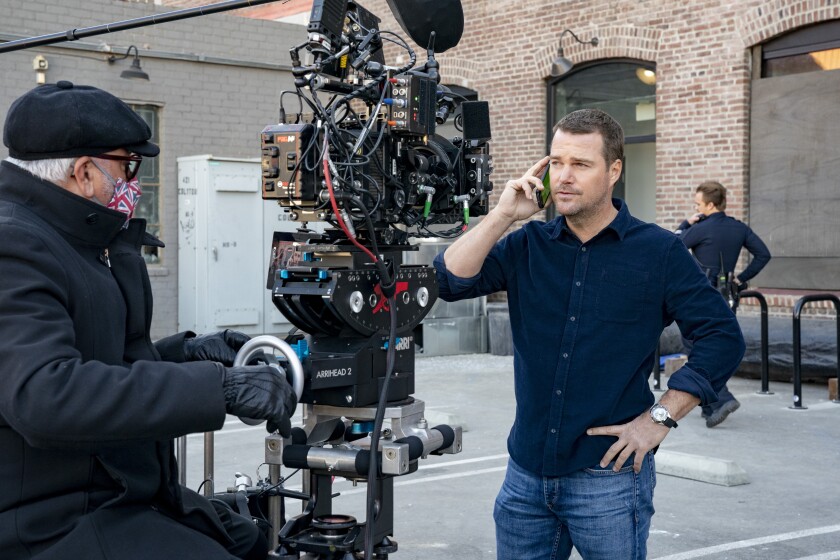 An insatiable demand for new TV shows has helped drive a rebound in filming in the first quarter of 2021.

A new movie studio in the Sun Valley neighborhood of Los Angeles that will have seven soundstages was announced in July by Hudson Pacific Properties Inc., one of the country’s biggest studio operators. Its Sunset Glenoaks Studios is expected to be completed in late 2023 in an industrial district on Peoria Street near Glenoaks Boulevard.

Other recently announced studio projects include a $650-million plan to build 17 soundstages on a site now occupied by the Los Angeles Times printing plant on Olympic Boulevard in an industrial neighborhood in downtown Los Angeles. The Times’ landlord, Atlas Capital Group, intends to develop the parking lot around the printing plant in the near future and eventually take over the 1980s-era building and turn it into stages. The Times may extend its lease there into the 2030s.

Los Angeles real estate developer David Simon intends to build a $450-million independent studio in Hollywood with five soundstages and support facilities, including offices and bungalows for entertainment creators. It would be called Echelon Studios and would replace a long-closed Sears store and parking lot on Santa Monica Boulevard west of the 101 Freeway.

Hackman Capital Partners, the owner of Television City, formerly operated by CBS, announced plans in March to make $1.25 billion worth of improvements to the Los Angeles lot, including raising the number of soundstages to at least 15, from eight, along with production support facilities and offices for rent.